Berthoud has the benefit of a large city police department at a small budget by bringing in sheriff’s deputies to serve as the town’s police officers. 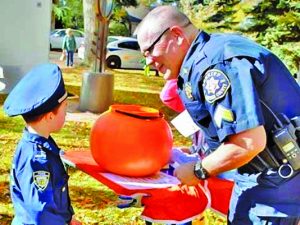 Sgt. Jim Anderson of the Larimer County Sheriff’s Office talks to local children during Trick-on-the-Street Halloween 2015, when children stop in businesses on Mountain Avenue and visit Fickel Park. The sheriff’s office set up a table tat Fickel Park at the even hosted by Grace Place.

“I love to make people feel safe,” said Sgt. Jim Anderson of the Larimer County Sheriff’s Office (LCSO). “When I came in here, there were a lot of people that didn’t feel safe; they didn’t have law enforcement that made them feel that way.”

A 2014 investigation of the then police chief and an officer led to the local police department being disbanded. That same year, Anderson began leading the Berthoud squad of the LCSO that replaced the police department. He wanted to create a safe environment for Berthoud’s residents, while also making sure their concerns were heard.

Part of that effort included launching Coffee with a Cop at Da Bean Coffee House seven months ago in downtown Berthoud, where Anderson welcomes residents to stop in the coffee shop the third Thursday of the month. He wants to give residents an opportunity to ask questions, air their complaints, and offer suggestions he said, in a non-confrontational way.

“It’s friends sitting with friends having a cup of coffee,” Anderson commented. “People have a perception of what we should do and what we do, and when asked those kinds of questions, I can actually tell them this is the real life of law enforcement.”

Anderson came into the leadership of the Berthoud squad, in part, because he lives in Berthoud and had his start in a small town. He grew up in the Johnstown area and attended Roosevelt High School, knowing since he was a child he wanted to be a cop after meeting a cop who served in an enforcement role at a skating rink in Denver.

“I got to admire him, and he was a good role model for me,” he said.

Anderson served in the U.S. Army for six years and, before he went in, got fingerprinted at the Weld County Sheriff’s Office. He talked to the sheriff at the time, who asked him about his plans after his service. Anderson told him he wanted to go into law enforcement, and the sheriff recommended he work for the LCSO as, in his words it was a, “great agency.”

Anderson first worked in the oil field for five years before he decided to earn an associate’s degree in criminal justice. He returned to Johnstown in 1989 as a police officer there, moving up to the rank of sergeant by the time he left the department in 1996.

That year Anderson took a position as a deputy at the LCSO, heeding the advice of the Weld County Sheriff. Two years later, he was appointed as a school resource officer for middle schools in Wellington and LaPorte, a role he held for another two years. He also worked in patrol and as an evidence technician.

“I really got interested in evidence because I was basically getting tired of people lying to me, and I realized evidence doesn’t lie,” he said.

In 2004 Anderson moved up to corporal and became a crime-scene specialist. Three years later he was promoted to sergeant and put in charge of the crime lab.

As he worked for the sheriff’s office, Anderson closely followed what was occurring with the Berthoud Police Department, interested because he lived in Berthoud, he said.

In 2014 the sheriff’s office assigned another sergeant to be the interim chief of the police department during the investigation, operating the department with the current police officers on staff.

When asked how he initially was presented the Berthoud position he said, “I was approached because I live here and started in a small town.”

Lt. Ian Stewart of the sheriff’s office commends Anderson for his experience and background.

“He brings decades of experience and a wealth of institutional knowledge, not just about law enforcement, but specifically towns in southern Larimer County,” Stewart said. “He understands that balance between small town policing and the growing population boom of Northern Colorado.”

“I was doing a presentation to the town board, and they asked me what I felt was the biggest problem in school, and I said it was drugs no matter where you go,” Anderson said about bringing in an officer at the middle school level.

According to Anderson, the sheriff’s office provides the town with a service that costs less than operating a police department, a continual cycle of new vehicles, and a higher level of training for the staff, which also is higher paid.

“There’s nothing different, because the police department and sheriff’s office both follow the state statutes, which is the law that we follow,” he said. “One of the things we have really worked on is ownership and buy-in. We really care about what happens in the community.”

Part of that caring is aiming to make the residents feel safe and by being personable.

“I’m kind of a jokester, and if I can make somebody smile that makes my day. If they laugh, that’s better,” Anderson said.

Anderson and his wife Michelle have three children and two grandchildren, and one on the way. Anderson likes to play golf and video games, work in the yard, hang out with his dog, a Basset Hound named Ruby, and go fishing and on hikes.

“He really cares about people. He’s always been involved with them and the community. He’s amazing,” Michelle commented. “He always wants to help with the community and be there for them. … He’s very kind and caring. He usually puts everybody above himself.”