The metal horse with spiraled blue and bronze wings seems to fly as he rises up on his hind legs at Fickel Park.

The nearly nine-foot sculpture, made out of recycled steel, is on loan to the Berthoud Arts & Humanities Alliance (BAHA) Artscapes program for one year, brought to the park in mid-May through an arrangement with Denver sculptor Reven Marie Swanson.

“I thought the energy and scale and spirit of the piece would be appropriate,” said Berthoud resident Charlotte Zink, cochairman of BAHA and co-owner of Zink Metal Art with her husband, Ben. “That piece, in particular, was special to her. It was almost a memorial to her first jumping horse as a young equestrian.” 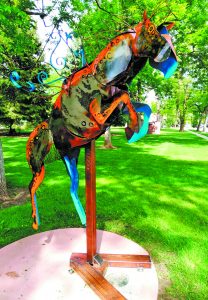 Photo by Shelley Widhalm: Reven Marie Swanson’s “Rogan” in Fickel Park is on loan for one year through the Berthoud Arts & Humanities Alliance Artscapes program.

Swanson named the piece, which she created over four months in 2012, “Rogan,” after the first horse she showed and competed with after spending two years rehabilitating him and another two years doing more rehabilitation following an injury. She rode him for 15 years until he died at age 28 and has been riding for 21 years, something she started when she was in her early 30s.

“The recycled materials seemed so fitting for how he came about, how his life was,” Swanson said. “He was almost a recycled horse, not shown for five to six years, handed through a series of riders. It made him nervous and not trusting. … What I learned from him was how to have honest relationships, how to show emotions. … He taught me what’s important in life.”

“Rogan” is on display at the western end of Fickel Park, alongside four permanent pieces, “Panzon,” “Mt. Mariah,” “Old Gold Tooth” and “Walrus & Calf.” Artscapes, founded in 2003, provides the pieces, alongside two additional rotating pieces at Pioneer Park and in front of Berthoud Town Hall. BAHA, supported by grants, donations and membership, is searching for sculpture to place in the rotation.

The BAHA Artscapes program is one of 10 stops presented in the new “Art in Public Places, A Walking Tour” brochure, the result of a nine-month project of public art in Berthoud’s historic “old town.” Mark French, a Berthoud history specialist and president of the Berthoud Historical Society, developed a map of the stops with Nicole Jenkins, owner of Aer-o Studio in Berthoud. May Soricelli of the Berthoud Photo Journal provided the photography for the maps.

“The most important thing was chronicling the history of public art in Berthoud and also to motivate people to go out and look at the art,” Jenkins said, adding that the creators of the map want the community to know “there is art and there are artists living in Berthoud, and we want them to explore that.” 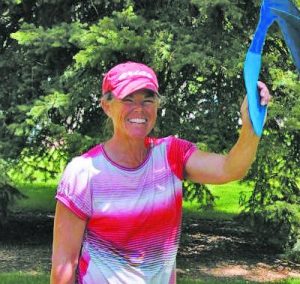 Photo by Shelley WIdhalm: Denver artist Reven Marie Swanson poses May 15 in front of her sculpture, “Rogan,” which is on display at Fickel Park.

The map, printed in early May, chronologically lists the location of various pieces of public art giving a description and history of the artwork. The pieces include murals, sculptures and embellishments of the town’s historic buildings, public parks and street corners with things like leaf motifs on lamp posts and hand-forged wrought iron gates. The map begins with the “C.&S. Locomotive at Berthoud” mural, painted in 1990 at the Berthoud Community Center, and concludes with the “All In at City Star” mural, painted in 2017 at City Star Brewing.

“Our strip of main street is so many blocks, so it makes for a lovely walking tour,” Zinc said. “We do have quite a bit to share … fabulous landmarks and treasures that make our small community what it is.”

BAHA, a nonprofit founded in 1998, provides public art, art shows and summer art camps and activities for the Berthoud community and oversees Paint the Town, a mural program, and the Artscapes sculpture-on-loan program. Some of the sculptures end up being purchased to provide a mix of permanent art and fresh and new pieces, Zink said.

“When you have artwork, it generates conversation. It generates a destination for people to come and visit and linger a little bit,” Zinc said. “I’m really grateful and excited about the continued energy that has been put into and applied into the arts and culture of the community.”

Zink invited Swanson to submit a piece for Fickel Park and liked her choice of subject, which combines the solid strength of a horse with the lightness of flying. The use of metal enamel and powder coat gives him his bright colors, she said.

“That’s a beautiful expression of human and horse working together,” Zink said.

Swanson created “Rogan” to express her appreciation and memory of her horse and “his bascule shape, energy, power and, most importantly, his honesty,” as she stated in her artist statement.

“I participate in art-on-loan programs. … I’ve been doing this for a lot of years, particularly with public art programs,” said Swanson, who has commissions throughout the Rocky Mountain region and the West. “By supporting these programs, it brings art to the streets. … It puts it right there, so every