Josh Embrey is serving Berthoud by overseeing more than 7,000 trees in the town.

Embrey is the town forester and open space manager for Berthoud—he added the second title earlier this year and has served as the town’s urban forester for more than five years. He works with a full-time forestry technician and a full-time open space technician to carry out the duties of both positions.

“I’m a tree guy, so I get to work with trees every day at work,” Embrey said.

As the town forester, Embrey’s role is to maintain the town’s urban forest of planted and naturally occurring trees by monitoring their overall condition, diversity and management needs. To do that, he develops management plans for the trees, plans their maintenance schedules, plants new trees, and removes broken branches and any trees with the potential to cause harm, such as those restricting other trees from growing or that are overly aged or dead or dying.

“There are lots of diseases and funguses. Each tree has its own thing,” Embrey said.

Embrey monitors the town’s trees for invasive pests—luckily, the emerald ash borer that has struck many trees in Larimer County hasn’t been detected, identified or confirmed within town limits. Native ash borers, however, are in the town’s trees, including the red-headed ash borer, banded ash borer and ash bark beetle.

“They can cause a threat, but they don’t cause the damage, not near the threat the emerald ash borer does,” Embrey said. 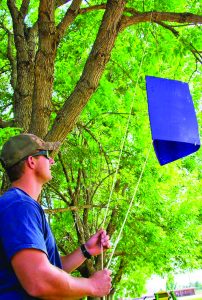 File photo – Josh Embrey, forester for the Town of Berthoud, sets out a purple-prism emerald ash borer trap in Bien Park to determine the insect’s presence in town prior to their detection in 2019.

Embrey is directly responsible for managing more than 1,500 trees in town parks, open spaces and natural areas and at town facilities and the town cemetery. The rest of the trees are in public right-of-ways, the strip of landscaping between streets and sidewalks that is the responsibility of homeowners.

“I get to plant new trees for future generations. I get to help trees that need help,” Embrey said. “I remove trees that no longer fit the urban setting … creating that aesthetic trait that’s found in the urban forest.”

Embrey oversees the town’s open space and natural areas as the open space manager, something he handled as the forester but now is doing officially with his added title.

“They go hand-in-hand, the open space and the forestry,” Embrey said. “It’s part of the urban infrastructure, the trees as well as the trees out in the natural areas. It makes sense to combine them.”

The town has 225 acres of existing parks and open space and another 170 acres of planned parks and open space, as well as 1,251 acres of conserved agricultural lands, or farmland and other properties that have been placed in conservation easement. The town’s open space, which includes its lakes and the Berthoud Reservoir, is a designation meant to protect undeveloped land and environmentally sensitive areas, including wildlife habitats.

“It’s the oversight and management and maintenance of these areas,” Embrey said.

Embrey, who grew up on a farm in Dayton, Va., earned a bachelor’s degree in forestry and ecology in 2012 from James Madison University in Harrisonburg, Va. He worked for the U.S. Forest Service from 2012 to 2015, conducting field and laboratory research on nonnative and invasive insects, focusing on the emerald ash borer. He then worked as a biological science technician for the city of Boulder Parks and Recreation Department before coming to Berthoud in 2016. He is an International Society of Arboriculture-certified arborist and an ISA-certified arborist municipal specialist.

“They just provide a lot of ecological, environmental, economic and social benefits. They’re an important asset to a community,” Embrey said.

Trees improve air and water quality, reduce carbon outputs, conserve energy, reduce storm water runoff and erosion, and provide a habitat for wildlife, Embrey said. They increase property values, reduce housing vacancy rates, and attract visitors and new businesses and residents to a community, he said. They also decrease maintenance needs of infrastructure, such as pavement from the shade and cooling benefits they provide, he said.