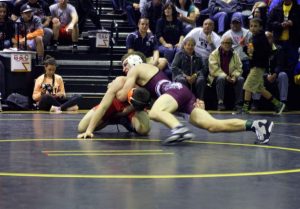 Berthoud wrestling welcomed the Holy Family Tigers to the mat as they celebrated Senior Night on Jan. 28. Hometown seniors Matt Bonds, Sebastian Gonzalez and Ivan Warehime were honored prior to the contest.

The dual was bitter-sweet for the seniors as Bonds and Gonzalez both accepted wins via forfeits, and Warehime was pinned by 3A No. 5-ranked Willy Clements at 285 pounds. Despite Warehime’s loss, the Spartans dominated Holy Family, winning 58 to 18 with six Spartans wrestlers recording pins, including: Michael Creager (113), Matthew Bailey (120), Kyler Bailey (126) and Devin Vise (152) over No. 9-ranked Kolsen Welham. Berthoud’s Ben Poirier (160, and Chad Ellis (170) also won by pinning their opponents.

Colin Leypoldt (106) added points via forfeit. And the match of the night ended with Berthoud’s Jimmy Fate (145) easily handling 3A’s No. 2-ranked Joseph Prieto in a 19-7 decision. 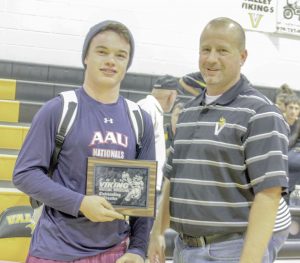 Berthoud’s defending state champion Jimmy Fate received the Outstanding Wrestler Award at the 2015 Viking Wrestling
Invitational on Jan. 31. Fate defeated 3A No. 2 ranked Joseph Prieto of Holy Family for the second time in a week to receive the award.
Karen Fate / The Surveyor

The Spartans traveled to Gilcrest on Jan. 31 to compete in the 16-team Valley Viking Invitational where brackets were loaded with ranked wrestlers.

A fourth-place team finish was a bit of a disappointment after placing nine wrestlers. But Berthoud had a trio of champions including Kyler Bailey (126) winning his first high school tournament. Fate (145) beat No. 2-ranked 3A Prietio handily for the second time in the finals and won the outstanding wrestler award.

Berthoud’s Ellis wrestled an outstanding tournament, pinning all four of his opponents, including No. 5-ranked Rojas from Greeley Central and No. 3-ranked Ramos Vega from Longmont in the finals.

Freshman Conner Ballet and Creager both had break-out performances, wrestling strong to place in a tough field of wrestlers as well.

In preparation for the upcoming regional tournament, Berthoud will be tested across the board as top-ranked 4A Thompson Valley comes to dual the Spartans in Berthoud on Feb. 5. Thompson Valley is currently ranked No. 1 in 4A and is loaded with five top-ranked wrestlers. With Berthoud’s team peaking at just the right time, it should prove to be an exciting night. Berthoud wraps up its regular season at the Eaton Dual Tournament on Feb. 7.