The journey of a thousand miles begins with a single step. 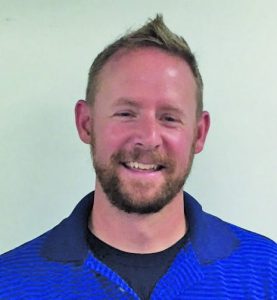 For a Berthoud High School (BHS) boys soccer team that has won only four games combined in the last three years, new Head Coach Scott Washenfelder is injecting a new approach and new energy to a team that returns a largely intact varsity roster from 2016.

“When this job became available I jumped on because I’ve been a part of this community and I’ve heard that the soccer team could use some help and just a different viewpoint. I’m excited to be here and work to turn things around,” Washenfelder said.

Washenfelder, who teaches at Turner Middle School, brings seven years of coaching experience with him, having spent time with the Thompson Valley High School girls team and University of Northern Colorado women’s team. He explained that coaching males and females are different, but at the end of the day, “soccer is soccer.”

The Spartans new leading man said he is very pleased with what he has seen from his team during the preseason – Berthoud won both matches in a scrimmage in Greeley this past Saturday – and sang the praises of multiple players. “Have a solid core of seniors on this team … one thing I am really excited about with this team is they’re already doing everything that I thought would take a lot longer to change. They’re hungry, they want to win, they want to change things around with this team,” he said.

Washenfelder called Berthoud’s leading scorer and 2016 All-Conference selectee Tyler Markell, “that typical striker who can just shoot from anywhere on the field and usually scores,” and said fellow senior Ben Marquardt is “a great leader on this team, he motivates people, he works hard, he’s someone who is just invaluable to this team.” Senior defender Kole Wysock, also named All-Conference last year, was called “our rock in the defensive four we have … he’s doing really well controlling the back and moving the ball around.”

Goalkeeper Hunter Hursey, who saved 188 shots as a junior in 2016, returns to that role this year, and Washenfelder expressed confidence in the senior, saying, “He’s just so solid back there.” Washenfelder said senior Adam Klein, an All-Conference honorable mention last fall, “might have a little different role this year. One great thing about Adam is you can play him anywhere on the field, and I’ve seen some other places where he can do some damage and help us out. He might play, not only defense, but some offensive roles as well.”

Washenfelder said he prefers a methodical, highly-strategic style of play. He wants to see almost constant ball movement that, “almost lulls the other team to sleep.” Washenfelder explained the approach thusly, “To me soccer has a rhythm … you make all these different moves, you pass the ball around, and you may make nine or 10 different passes before you even think about shooting, and that’s the style of soccer I want us to play.”

“They won two games last season, and I told the boys I guarantee they’re going to win more than that this year,” Washenfelder said. “But my biggest goal with this team is just to get them acclimated to what soccer should look like and feel like.”

Berthoud will begin the 2017 season with back-to-back matches on their home pitch, welcoming Northridge and Westminster to Max Marr Field at BHS on Aug. 28 and 30, respectively.