Schools close Friday as teachers rally outside the state capital 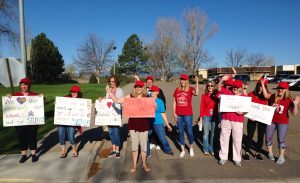 Teachers at Ivy-Stockwell Elementary School staged a “walk-in” on Friday morning April 27 to show their appreciation for the town of Berthoud.

Hundreds of teachers in the Thompson School District (TSD), including several of Berthoud’s educators, won’t be in class Friday. The reason behind the mass of absences – a rally planned to take place outside of the state capital to support improved school funding, better pay, and fully funding the teacher’s retirement fund, the Public Employee Retirement Association (PERA) system. Many school districts in Colorado, including TSD, will be closed on Friday due to the planned absences.

In a notice sent out by current TSD superintendent, Dr. Stan Scheer, it was announced all schools in the district would be closed on Friday, April 27, as over 425 leave absences had been filed last week. Scheer stated the safety of students was a priority in making the closing decision. “Although the district has a robust substitute teacher system that is designed to fill positions as needed, Thompson does not have enough staffing available to cover all of the absences,” the statement continued, “All teachers participating in their rally will need to use leave time to cover their absence, which is provided for in school district policy. Teachers and staff not participating in their rally will report to assignments as scheduled for a staff work day next Friday. Athletic and after-school activities will proceed as planned…” Scheer apologized for the inconvenience families in the district might experience due to the closure.

Joining along with fellow teachers in Kentucky, Oklahoma, West Virginia and Arizona, Colorado educators are staging demonstrations to bring attention to not only major funding gaps at the state level for public schools, but also low pay. Colorado currently ranks 46th in the nation in regard to teachers’ salaries, despite various organizations ranking the state around fifth place economically. This has also been linked as a contributing factor in the critical teacher shortage the state is experiencing.

Jean Bonnette a fourth grade teacher at Ivy Stockwell Elementary said around seven teachers from that school would be heading to Denver Friday. She also said that those remaining behind would be participating in a “walk-in” on Friday morning, “Our message to the Berthoud community is “thank you” for supporting schools in our town. We are so lucky to have the Berthoud Bash and a community that always donates with volunteers and [money].”

The Colorado Education Association (CEA), a statewide federation of teachers and education workers’ labor unions, on their website states this week’s demonstrations, slated to take place on Thursday and Friday, are for the following reasons, “We have great public schools in Colorado, but in too many communities we are not giving schools the resources they need for every child to succeed. To be sure that we can attract and retain high quality educators to Colorado, we must prioritize education funding so that educators can support their families and contribute to our communities and our children can reach their full potential.”

According to the Census Bureau, Colorado spends an average of $9,300 per pupil in the public school system annually. That number is $2,700 less than the average per-pupil spending nationwide and places Colorado in 42nd place. A further breakdown from the Census Bureau estimates in Colorado $5,240 of those funds go to instruction, $467 to pupil support, $569 to infrastructure, $151 to general administration, $654 school administration, and $2,164 categorized as other expenses. The state is also currently underfunding schools by more than $800 million each year compared to its requirements under the state’s school finance act.

On the pension side of the issue, PERA provides retirement and other benefits to more than 500 government agencies and around 560,000 current and former state, judicial system, local government, and school district employees. The system is currently only 60 percent funded, with unfunded liabilities estimated as high as $50 billion. With 30 percent of educators in the state nearing retirement age, major problems are on the horizon.

Senate Bill 200, which educators overwhelmingly spoke out against earlier this month, staging demonstrations protesting the bill at the capital, passed through the House Finance Committee after several amendments were made. The bill was slated to address many of issues facing the grossly underfunded PERA. Some of the changes to the bill that were approved of by the CEA included removing the defined contribution provision, allocating $225 M as a direct payment to help shore up PERA, which eliminated the proposed employee contribution increases that would have gone to help pay off the unfunded liability and eliminated the proposed retirement age increase from 60 to 65.

Critics of the amendments sought a three percent (from eight percent to 11 percent) increase in what is taken out of teachers’ and other PERA beneficiaries’ checks to shore up the system as opposed to placing the increased burden on tax payers, along with a provision that incentivized public employees moving their defined benefits pension funds into a defined contribution plan like a 401(k) to which many private-sector employees contribute. The current average benefits for new teacher retirees in the state are around $37,500.

The Taxpayer Bill of Rights (TABOR), the Colorado State constitutional amendment passed by voters in 1992 that requires a vote of the people to increase taxes, in combination with the Gallagher Amendment which placed a cap on property tax revenues are also considered by many to be contributing factors to the mounting problems facing school funding.