School resource officers educate community on drug use in Berthoud 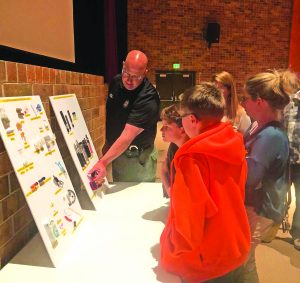 Photo by Amber McIver-Traywick – Student Resource Officer Kevin Kingston answers questions from Kristen Bialek, her son Cole and Seth Anderson about paraphernalia confiscated from Berthoud students on display after a presentation in the BHS auditorium.

Addy, JUUL, dabbing, lean – these are all terms most high school students are familiar with and many adults know nothing about. Larimer County Sheriff’s Office Berthoud Squad’s School Resource Officers (SRO) Ray Meyer and Kevin Kingston gave a presentation at the Berthoud High School (BHS) auditorium titled “Drugs in our schools, an SRO’s point of view” last month to educate parents and community members on the topic.

The officer,s who play an active role at both BHS and Turner Middle School (TMS), said prescription drug abuse and vaping are among the most common issues they are currently seeing at the schools.

E-cigarettes, or vaping, came on to the scene about a decade ago. The devices used have taken on several forms and, according to Meyer and Kingston, the most popular brand the officers are seeing used at the high school and TMS are the JUUL brand. JUUL is considered a tobacco product, as the nicotine used is derived from the plant and is illegal for anyone under the age of 18 to possess.

Meyer said vaping is rampant and a widely growing trend, “We have kids doing it in class; the smoke goes up, the vapor is gone, and the teacher has no idea…It’s the cool thing to do. I’ve caught more straight-A students doing this, and it shocked me.” Kingston said many of the TMS students who vape are learning it from older siblings and doing it before and after school.

“Vaping and JUULing is something we are dealing with on a daily basis – the kids are smart, and they are hiding it,” Meyer said, following up the statement by encouraging the parents in the audience to do an “eye-opening” google search for “how to hide JUUL from mom and dad, or how to smoke JUUL in the classroom.”

Vape is short for vaporizers, which are marketed as being a “safer alternative” to smoking. At the heart of every e-cigarette is a metal coil used to heat what’s called e-liquid or e-juice, which is placed inside the device. When the liquid hits the hot coil it produces a vapor that is inhaled. Generally the e-liquids are flavored with options ranging from watermelon and strawberry to cotton candy and even gummy bear – despite the manufacturer’s insistence they are not marketed to children. The devices come in many shapes and sizes, including ones that appear to be Sharpies, pencils with actual lead, and high-lighters.

The JUUL vape looks like a flash drive, complete with USB adapter for charging the battery and small clear cartridges containing the desired oil. One JUUL cartridge contains the same amount of nicotine as a pack of cigarettes. The officers said some students have admitted to going through multiple cartridges a day. Liquid marijuana is also easily added to the JUUL cartridges, further complicating the issue. Meyer said recently at another school in the district a cartridge was found to contain methamphetamine.

The American Lung Association would certainly agree with the SRO’s assessment of an increase in prevalence, as they found the use of e-cigarettes by teens increased by 900 percent between 2011 and 2016. According to the CDC, in 2016 more than two million middle and high school students used e-cigarettes each month.

Several studies in recent years on the effects of vaping, particularly in young adults, are startling. Aside from the fact research has shown adolescent brains are much more prone to addiction, research done at Harvard University in 2015 discovered 75 percent of the vape-flavored refills contained a chemical called diacetyl, which is linked to a disease called bronchiolitis obliterans, an irreversible lung disease also seen in people exposed to mustard gas. The vapor has also been found to contain formaldehyde and is linked to inflammation in mouth cells which can result in bleeding mouths and throats, eventually leading to severe gum disease and potential tooth loss. Vaping also has been shown to affect the immune system and slow wound healing. The number of teenagers with pneumonia has  drastically increased in recent years, and a study from the UK published in 2018 confirmed there is an increased risk for potentially lethal pneumonia in young adults who vaped.

The officers then explained another method for using vape pens, which is called dabbing. This method is used to get a highly-concentrated amount of marijuana, upwards of 90 percent THC, in one hit. Compared to typical medical or retail marijuana with 15 to 20 percent THC, the results are not surprising. Marijuana is processed to remove the THC substance from the plant using butane – a dangerous process that has resulted in explosions and house fires. The resulting product looks like ear wax and is aptly called wax, honey, or shatter. A small amount of wax is placed directly on the hot coil of the pen and the resulting fumes are inhaled. The action leaves the person inhaling completely immobilized.

Common prescription drugs students, particularly at BHS, are abusing are the ADHD medication Adderall, referred to as Addy, and the narcotic pain medication Oxycontin or Oxy. Kingston said, “Addy is very big here in the high school. We have a lot of kids that are taking Adderall, and they aren’t supposed to through a prescription.” Adderall is an amphetamine that affects the brain and central nervous system. For those with ADHD, it has a calming affect that enables the individual to focus. If the drug is not needed it causes shaking, rapid heart rate, hyperactivity, weight loss, dizziness, aggression, and can lead to hallucinations, potential cardiovascular failure or seizures.

Lean, which is also called Purple Drank or Syzzurp, is a cocktail made from prescription cough medicine containing codeine and promethazine, Sprite and, optionally, Jolly Rancher candy. It was made popular by several hip-hop and rap artists who espoused its use beginning in the 1990s – a few of which overdosed on the concoction. It is highly addictive and potentially lethal. According to Kingston, TMS students have been found consuming lean. If prescription cough syrup is not available, students have used products like Nyquil. A bottle of Nyquil has over 9,000 mg of acetaminophen in it, enough to cause liver damage and potentially liver failure.

Meyer said, “It has to be a group effort, we’re trying our best, the administration is trying it’s best to do what we can to try to curb this situation.” Kingston followed up telling parents of their open-door policy by saying, “If you think of something along the way, email us, come in and see us at the school. We are more than happy to talk to you guys and give you whatever help we can.” The officers said they appreciated the parents in the audience who were there to become educated on the issues facing students in order to help stop these dangerous trends. The full presentation can be watched online at youtu.be/7x-VMGPr9Q4