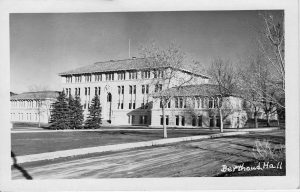 Berthoud Hall at the Colorado School of Mines in Golden, Colo., was named in honor of Captain E.L. Berthoud. Also the namesake of the town of Berthoud, Captain Berthoud surveyed the course of the Colorado Central Railroad between
Longmont and Cheyenne (and through the Little Thompson Valley) in the 1870s.
Photo courtesy of Berthoud Historical Society

Capt. Edward L. Berthoud was one of the men who helped establish the Colorado School of Mines. In 1870 he was among the prominent citizens of Golden who urged Colorado Territorial Legislature to appropriate funds for the construction of the school’s first building. A respected geologist and engineer, Berthoud also became a member of the school’s original three-person faculty. To honor his many contributions, a new, state-of-the-art building at the university was named for him in 1940.

On March 21, 1940, the Berthoud Bulletin announced, “Berthoud Hall in the new geology-geophysics building on the Colorado School of Mines was dedicated at Golden Friday, March 15.

“This hall is named in honor of Captain Edward L. Berthoud, first professor of geology at the school. Captain Berthoud was active in the affairs of the school for thirty-five years, until his death in 1908.

“A picture of Captain Berthoud which was presented to the school by the town of Berthoud is on display in the main foyer. A bronze plaque bears this inscription: ‘Edward L. Berthoud, first professor of geology in this institution, whose vision as an empire builder, and ability as an engineer should be a lasting inspiration to all. Placed by the Town of Berthoud through the Woman’s Club and the Junior Chamber of Commerce.’

“The dedication address was given by Everette DeGolyer of Dallas, Texas, a well-known petroleum geologist and geophysicist.

“Mrs. L.A. Forster told of the ability of Captain Berthoud in completing the railroad through northern Colorado in 1877. Berthoud Pass as well as the town of Berthoud bear Captain Berthoud’s name. Mrs. Forster was the only woman honored with a place on the program…Visitors were taken on a tour of the geophysics wing to see the latest equipment used in laboratory and research work. The new short-wave radio station, the Photostat machine and blue printing apparatus were demonstrated. The museum cases held a collection of fossils, gems, rocks and mineral specimens.

“A group of murals by Irwin D. Hoffman were the gift of Mrs. Barney Lee Whaley. These murals, depicting the stages of early mining development, have been displayed at the San Francisco world’s fair.

“Berthoud Hall was completed in January 1940, at a cost of $450,000. The steel, terra cotta, tile and cement used in its construction were all Colorado products.”

The picture of Capt. Berthoud that was presented to the Colorado School of Mines by the Berthoud Woman’s Club, was commissioned in 1937 for a local celebration that marked the 50-year anniversary of the laying of the Colorado Central Railroad tracks across the land that became the site of present-day Berthoud in the winter of 1883-84. (Capt. Berthoud was responsible for surveying the course of the railroad.) The original steel plate engraving was produced by Hildreth Studio of Longmont and hangs in the Bimson Stone Shop at the Little Thompson Valley Pioneer Museum.

Capt. Edward L. Berthoud never lived in the town that bears his name, nor is there any record of him visiting the tiny burg that was named for him in 1877. Charles C. Welch, an official of the Colorado Central, is credited with naming Berthoud in honor of Capt. Berthoud and Loveland in honor of William A.H. Loveland. Both Mr. Berthoud and Mr. Loveland played key roles in the construction of the Colorado Central Railroad between Cheyenne and Longmont in 1877.