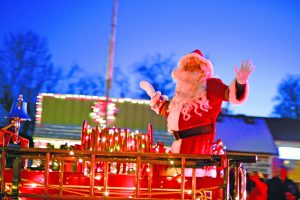 File photo – Santa rides on the back of a Berthoud Fire truck in the 2015 Christmas in Berthoud parade.

As we all know, Santa Claus is coming to town very soon. We at the Surveyor are fortunate to have a publisher, Becky Justice-Hemmann, who knows a lot of people. As it turns out, among her many contacts, she knows Santa. This is certainly his busiest time of year, but we were pleased after reaching out to him and he laughed his signature laugh, which I imagine made his belly shake like a bowl full of jelly, he quickly agreed to do an interview with our newspaper. Despite his global fame, Santa has never let it go to his head; but remains a humble, kind and right jolly old elf who was a true pleasure to speak with.

Many people in the area are aware Santa is no stranger to Berthoud, as he not only visits on Christmas but also makes time to be present for the Christmas parade as well as other events around town. You may have seen him riding on the back of a Berthoud Fire Department firetruck at the end of the parade in years past.

When asked what some of his most memorable requests were he recounted the following story. Santa is always happy to hear about all the things boys and girls want for Christmas, but he said one little girl from Berthoud asked for something memorable several years ago while he was visiting the community center. During his visit a little girl was a bit shy and wasn’t saying much. After some encouragement Santa said, “She leans over and whispers, ‘I want snow for Christmas.’” That’s a pretty common thing for many people to want during the holidays, but this particular year there was a drought going on which made the wish more difficult. Santa took a moment to think about it but agreed it would be a wonderful gift and he would see what he could do. The little girl jumped off his lap, ran to her parents and informed them they would in fact have snow on Christmas.

A miracle is defined as, “a surprising and welcome event that is not explicable by natural or scientific laws,” and a Christmas miracle may have happened that year, as the little girl from Berthoud did, in fact, to Santa’s delight, get to wake up to new-fallen snow on Christmas morning.

Many children are a bit apprehensive to meet Santa and when asked how he approaches these instances Santa said, “I think just having a larger-than-life person right in front of them they don’t know how to react at first,” he continued, “I just talk real softly and reassure them, a lot of them seem to be afraid of the beard so I try to get them to touch it or I just ask them to whisper in my ear what gift they want, and I won’t move…sooner or a later they come around.”

Santa is used to being asked if he is the “real” Santa and understands why children would want to ask this as it is an important question. He recounted meeting one little boy who had a unique vision of who Santa Claus was and was convinced he wasn’t the “real” Santa. The little boy said Santa was a cowboy like his daddy, and since he didn’t have spurs or a holster he couldn’t be the “real” Santa. Being a very understanding and patient fellow, Santa told the little boy he was there to help out and would let “Cowboy Santa” know exactly what he wanted for Christmas.

One of the most important questions we felt Santa should be asked is how to be on the “nice” list. Santa said, “You have to be good to your family, and especially mom and dad, do your chores, do what you’re asked to do, and be nice to other people” – wise words for everyone to live by all year long. If by some chance you do end up on the “naughty” list, we asked Santa how one might go about getting off of it, to which Santa replied, “It takes a little while; keep being good, but the best way is to not get off of the nice list.”

When asked what Santa liked the most about what he does he said it’s all about the hearts of the children he gets to meet. “The magic of Christmas is still alive in them, that is the biggest thing, that really is it – they believe in wishes and miracles. It’s just nice to see the glisten in their eyes and see them excited.”

Santa is certainly keeping the magic alive in the modern era by staying on top of modern technology. A few of these resources include santaslive.com where children can be signed up to receive a phone call or even schedule a video chat with Santa. By visiting portablenorthpole.com parents can get a personalized video message from Santa for free. Then of course, as the big day gets closer you can visit Colorado’s own noradsanta.org where Santa is tracked live on Christmas Eve via the internet by NORAD (North American Aerospace Defense Command).