Berthoud resident Ryan Armagost, Republican candidate for Colorado State House District 64 (HD-64) that includes all of Berthoud proper as well as unincorporated areas to the south and east, has long possessed a predilection for public service.

Armagost, a veteran of the United States Marine Corps and the Army National Guard as well as a Larimer County Sheriff’s Deputy, a firefighter, never thought of himself as a politician, but wanted to continue serving his county and his community as he had throughout his adult life. 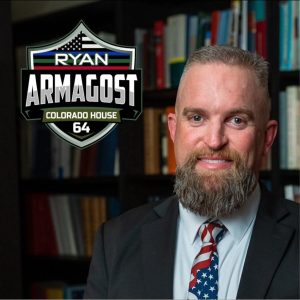 “I knew I wanted to change things, but I knew I didn’t have a platform and then when the redistricting map came out, with me living in District 64, I got on board and threw my hat in the ring, not thinking anything would come to fruition but it has been a very fruitful and rewarding process,” Armagost told the Surveyor.

Since securing the Republican nomination for HD-64 in an uncontested race, Armagost has canvassed the district, along with an army of volunteers, and has been listening to the concerns of voters and potential constituents. “It’s been an eye openings experience,” Armagost said. “The surprising thing is how many people can relate to my biggest platform issues – everyone is struggling with inflation, the rising cost of living and everything going on.”

One of Armagost’s primary campaign planks has been addressing issues of mental illness and addiction problems as he believes they are a primary factor contributing to the rise in crime, recidivism, and homelessness. “No one else is driving the mental health, the mental illness, the addiction issues and how all that comes out in the other issues with the increasing crime,” he explained.

He continued, “A lot of people have a friend or a family member who has mental illness or an addiction problem, but it’s a rare few who have someone who is or has been institutionalized for those problems, and those people know the system is broken. I worked eight years in the jail, two years on patrol, and I saw it firsthand, both of those, the system is broken between the criminal justice system and Colorado’s mental health treatment opportunities. There is nothing in place and nothing that ties the two together.”

Armagost believes that the state should build a better system where those convicted of crimes can get treatment and support if an impetus in committing said crime was at least contributed to as a result of mental illness or addiction issues.

“Somebody gets incarcerated, they are severely struggling with addiction issues, with mental illness, they are self-medicating, they need help but their family can’t help, this is their opportunity, they’re being detained for the crime they committed but how can we get them the treatment they need so they don’t stay in the system, they don’t keep re-offending, they don’t keep re-victimizing people when they get out. We need to fix that link, repair that bond between the state and the law enforcement agencies to create a better direct line of support,” he explained, adding that it is not just related to criminal justice but also to the homeless population which has increased at an alarming rate in recent years in Colorado.

“Crimes deteriorate our society; we need to deter crimes with harsher sentences. The problem is there are soft attorneys and judges and I think they need to be held accountable, even liable if somebody is re-victimized. There have been people who have been victimized by the same suspect multiple times, Armagost said, stating that he is a strong proponent of law and order as he has seen the worst of the worst during his time in law enforcement. “We need to make fentanyl possession a felony, we need a minimum sentence to deter people, the ones that are caught with it will get the treatment they need.”

On other topics that he hears when speaking with voters, Armagost would like to see the state do more to foster the development of oil and gas production, saying he understands the need for environmental protection and that fossil fuels and “green” energy do not need to be an either/or proposition for the state. “There are so many people that want to push green energy, but we have some of the cleanest oil and gas production in the world, our regulations in Colorado are also some of the stiffest,” he explained.

HD-64 contains a great deal of oil and gas land as well as agricultural land, both of which have been on the receiving end of ever more burdensome regulations and restrictions. “Our farmers and ranchers are being abused by the system, more and more regulations put on them that make their jobs harder,” Armagost said, adding that those in agriculture, as well as energy production, deserve a seat at the table with lawmakers and some “commonsense conversations” need to be had with all parties involved.

On education, another issue of concern to many constituents in HD-64, Armagost favors school choice. “If your child is not getting an adequate education, if you can’t get that in the public school you’re required to take your kids to, then you should have the right to put your kid in private school, in home school and still receive the same benefits to help pay for that. The money should follow the student,” he explained, adding that public schools need to focus on fundamental academics and need to emphasize teaching American history – the good, the bad and ugly – and also emphasize civics.

All in all, Armagost explained he simply wants to bring common sense solutions that benefit all residents, regardless of their political stripe.

“I am a proven leader and servant, I am not a politician at all, I have spent my life serving in the military, in law enforcement, as a firefighter, I haven’t studied leadership, I’ve lived it. We need strong leaders to bring common sense to the table and shut down conversations that are not productive to our state. We are a government of the people and for the people, not to the people, we have too many people with selfish agendas, that’s what’s going wrong in our state, they are not working for the people.”

Editor’s note: The Surveyor made multiple attempts to contact Richard Webster, the Democrat Party opponent of Ryan Armagost for the House District 64 election but received no response by press deadline. We encourage Mr. Webster and/or his supporters to contact the Surveyor prior to Oct. 31 so we can publish a similar story for our readers.