Root Shoot Malting is adding another malting drum this winter to be able to malt an additional 1 million pounds of grain. 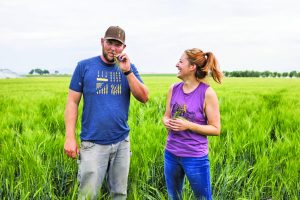 The Loveland-based company, founded in 2016, malts small grains grown on farms in Berthoud and Loveland to sell to Colorado breweries and distilleries. The third malting drum brings the company’s malt production to 3 million pounds a year to serve the state’s growing craft industry.

“That’s the unique thing to us is we are vertically integrated where we can purchase the seed we want and produce the malt varieties growers want,” said Emily Olander, co-founder of Root Shoot Malting with her husband, Todd. “Not many malthouses in the U.S. or the world are also farmers.”

Root Shoot Malting is a cultivation of Olander Farms by fourth- and fifth-generation owners Todd and his father, Steve, of the family farm founded in 1926. Malting grains are grown on the farm, which historically grew corn, wheat, barley and alfalfa. Steve took over the farm in the early 1970s, starting with malting barley for Coors and Budweiser. But after a couple of decades, he wanted to exit the commodities market and instead focus on the craft brewery and distillery market.

“We wanted to provide small grains and connect farming families to craft beer and craft spirits and agriculture in general,” Olander said.

The small grains include barley, wheat, rye and oats, plus the farm grows corn for distilleries to use, selling an average of 1 million pounds a year. The grains and corn are grown on the Olander’s 112-acre Loveland farm and another 1,800 leased acres in Berthoud and Loveland. This includes 280 acres on Hwy. 56 between County Roads 3 and 5 and another 420 acres west of Hwy. 287 in Berthoud.

The 280-acre property is being conserved in partnership with Colorado Open Lands—a portion of the easement was completed in January 2022 and the remaining easement will be completed in 2023.

“It’s important to save farming in the area and stay ahead of development,” Olander said. “This land will always be agricultural land, and we hope to continue farming it for years to come.”

Olander Farms also is working with Colorado Open Lands to place a conservation easement on its 112-acre farm.

Root Shoot distributes the grains and malt to approximately 150 breweries in Colorado, about 35% of the market, and another 20 distilleries in the state and one in Texas.

“I like their collaborative vibe,” Olander said about the craft industry. “People are willing to work together and share ideas and are very community-driven, trying to get the community and customers involved in their business. We like to be part of that.”

Root Shoot purchased the Kaspar Schulz malting system, manufactured in Bamberg, Germany, to outfit its malthouse. It is the first craft malthouse in the U.S. to operate the system and now is among three nationwide that uses it.

The malting system consists of a steeping vessel and germination-kiln combo drums capable of producing 20 tons of craft malt each week. 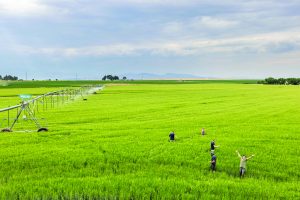 Photo by Emily Sierra Photography in Berthoud – Small grains are grown at Olander Farms and are crafted and sold to craft brewers and distilleries through Root Shoot Malting.

“Malting is a process that converts and activates the enzymes in barley or wheat, making those available for brewers to be able to ferment and create alcohol from it,” Olander said, explaining that malting extracts sugars from the grain needed for alcohol production. “You’re tricking (the grain) to grow again.”

The grain is malted and kilned at different temperatures for the various styles of beers—the darker roasts can have chocolate and coffee flavors and the lighter roasts are used for beers like IPAs. Root Shoot produces 13 varieties of malt each year.

“There are different flavors you can play with, depending on how high you kiln and for how long,” Olander said.