Berthoud Habitat had to cancel many of its volunteer teams this summer for its home-building projects, but Rogue 1 formed a separate group to offer help during the COVID-19 pandemic. 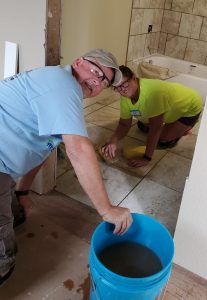 Courtesy photo – Brian Forney and his wife, Jolyn, fulltime RVers of Missouri, are doing tile work Sept. 16 in the bathroom in one of the homes under construction in the Berthoud Habitat for Humanity neighborhood on Fourth Street. They are part of the Rogue 1 volunteer team that is helping out the Habitat this month.

“In spite of COVID and the restrictions organizations are having to deal with because of the legalities of COVID, there are some people who feel so strongly about helping out, they’re doing it anyway. They know we’re limited in our volunteers,” said Jan Dowker, executive director of Berthoud Habitat for Humanity, and affordable housing program that helps low-income residents achieve self-sufficiency and an affiliate of Habitat for Humanity International.

Since March, Berthoud Habitat has had four to five volunteers on site above the partner members, when normally it has teams of volunteers that help out the affiliate. A team typically has six to 15 volunteers and can come from other nonprofits or corporations.

“We don’t have those teams coming in at all because of COVID,” Dowker said “The number of volunteers is far fewer than originally anticipated. … We are hopeful they will start up again at the end of this year.”

The Rogue 1 team, led by Bill and France Moriarty of Polk City, Fla., arrived with nine volunteers traveling in five RVs, including four married couples and a single man. Two of the RVers are staying for two weeks, and another two will come for the last two weeks of the four-week visit Sept. 8 through Oct. 3. That second group will have 10 volunteers on the site.

The team originally operated as part of Habitat for Humanity International’s RV Care-A-Vanners volunteer program, which travels the nation to help out Habitat affiliates. The Berthoud Habitat joined Care-A-Vanners in 2016, but this year Habitat International temporarily shut down the program, likely until next year, because of COVID.

Rogue 1 already had its trip planned and thought up their name as “a lighthearted way to say they were going to volunteer anyway,” Dowker said.

“This affiliate really counts on the Care-A-Vanner volunteers,” Moriarty said. “They needed the help. This COVID is putting a damper on nonprofits … No one is donating money. No one is contributing. No one is volunteering. The nonprofits are taking a really hard hit.”

The team is stationed at Habitat’s construction site on Fourth Street, where three homes are under construction for the affiliate’s partner families. The team is working Tuesday to Saturday on homes numbered 15 and 16.

Home 16 as well as home 17 were built through a partnership with Thompson School District’s Geometry in Construction high school program and are being finished on site. Work on the homes was stopped in March with the move to remote learning. Home 16 came from Thompson Valley High School and 17, which is still on the trailer, from Loveland High School.

“We got them less complete than expected,” Dowker said. “Depending on how COVID impacts everything, it’s estimated it possibly will be spring of next year (for their completion).”

Berthoud Habitat also had to cancel a six-week visit May to July by AmeriCorps NCCC (National Community Civilian Corps), a civil society program that engages adults in public service work. The affiliate planned to share the volunteers with Habitat for Humanity of the St. Vrain Valley.

The Berthoud and Loveland habitats applied for AmeriCorps NCCC to do a build trip in November and December and are awaiting approval.

“We’re limited by the number of volunteers allowed on our construction site, so that slows the homebuilding for our partner families,” Dowker said.

That number is 10 volunteers, who are required to wear masks, frequently wash their hands and socially distance, plus Habitat continually cleans the tools they use.

“Right now, we are doing everything we can to keep our team members safe and comfortable,” Dowker said. “We got a great group of people up there feeling very comfortable doing what they’re doing.”

In January, Berthoud Habitat will consider doing more stick-built projects to continue with its homebuilding efforts, Dowker said, adding that the affiliate temporarily lost two homes a year through Geometry in Construction.

“If we don’t have volunteers helping us building houses, everything slows down,” Dowker said. “It still has to get done. … We’re working harder with fewer volunteers to try to keep up with the schedule.”

The affiliate also has seen a decline in donations but has received grants, other sources of funding and the support of donations and purchases at the Berthoud Habitat ReStore, where the proceeds support the construction of additional homes.

“The town and the local foundations and grants have been incredibly helpful in helping us get through COVID,” Dowker said. “Because COVID has … stopped or slowed construction for the affiliates, we’re still building homes, but it changed how we do it.”