Despite the fact that it is a relatively young program – this season being only its fourth year in existence – the Berthoud High School girls swimming and diving team has been making waves, no pun intended, in the 3A ranks from the very beginning. 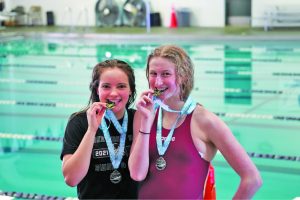 Photo by Mark Roberts – Berthoud’s Natalie Major (left) and Corinne Roberts each brought home gold medals from the Longs Peak League conference swimming and diving championships last weekend. The pair will be joined by 10 teammates at the 3A state championships this week in Thornton.

Roberts, a freshman phenom who has taken the league by storm this winter, took home the gold medal in the 100-yard breaststroke race, beating her own Berthoud High record with a stellar time of 1:10.27, breaking her prior best time and previous school record by nearly a full second. Her first-place time this past weekend was more than a full second ahead of second place Rowan Lavigne of Niwot (1:11.43). Roberts also placed second in the 200-yard individual medley, posting a time of 2:15.84, nearly five seconds ahead of her previous best time (2:20.33).

Major, a sophomore, took the top spot on the podium in the 500-yard freestyle endurance race, touching the wall in 6:01.88 in the finals, just barely behind the 5:59.88 time she posted in the prelims; her times in the event were the two best recorded in the meet. Major also took second place in the finals of the 200-yard freestyle, posting a time of 2:09.13.

The 2022 3A state swimming and diving championships will be held this Friday and Saturday at the Veterans Memorial Aquatics Center in Thornton.