There seems to be some discrepancies between the Berthoud High School Principal Dr. Sarah Beth Bliss, and former boys basketball coach Mike Burkett, in regards to his exit from the position. In several lengthy and detailed conversations with the Surveyor, former Berthoud High School (BHS) head boys basketball coach, Mike Burkett, adamantly denies that his separation from the program was voluntary, despite the school communicating as such to players, parents and the community. 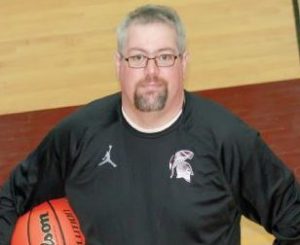 On Wednesday, Jan. 30, Burkett was called to the office of BHS principal Dr. Sarah Beth Bliss. According to Burkett, Bliss, who was joined in the  meeting by BHS Assistant Principal/Athletic Director Michael DeWall, informed Burkett he would be suspended for the remainder of the season.

According to Burkett, Bliss cited comments the coach had made to the Surveyor as well as to the Loveland Reporter-Herald as grounds for his resignation/termination. The tenor of Burkett’s comments revolved around what he believed to be a lack of support at the school and in the Berthoud community for boys basketball as well as what he perceived as a lack of appropriate effort in Berthoud’s Jan. 29 loss to Frederick. In that game Burkett benched four regular varsity players, all seniors, his son Ben included, for the second half of the game.

When Bliss questioned Burkett on whether he was misquoted either time or if his comments were taken out of context, Burkett answered, unequivocally on both accounts, in the negative. According to Burkett, Bliss said, “It doesn’t cast our community in a positive light,” in taking exception with his remarks.

Asked on Feb. 13 about the comments he provided to the newspapers to which he claimed Bliss used as justification for his resignation/termination, Burkett said, “I didn’t say anything that was terrible. I’m just trying to hold them to a higher standard is all I’m trying to do, and it probably wasn’t the accepted way to do things in Berthoud, Colo.”

The Surveyor questioned Bliss on what she believes are appropriate grounds for termination of a coach mid-season. “Any time there is a concern around an employee we work closely with TSD’s Human Resources Department. Hypothetical situations are just that. Each situation is unique, and we handle each as such,” Bliss responded.

Following the conclusion of the meeting on Jan. 30 and his departure from the building, Bliss phoned Burkett. According to Burkett, Bliss asked how he “wanted to spin this,” to which Burkett told her it was not his decision to discontinue coaching the BHS basketball program and that she would have to handle it on her own. A short time later, Burkett says he received another phone call from Bliss, where, according to Burkett, she informed him it had been decided Burkett’s separation from the program would be spun as a resignation and asked Burkett for a letter of resignation, which the former coach refused to provide.

Burkett forcefully claims he did not write or sign a letter of resignation or any other documentation acknowledging his suspension or separation from the program. The Surveyor filed a Colorado Open Records Act (CORA) request with the Thompson School District (TSD) to obtain all documentation pertaining to the issue – such as a letter of resignation, notice of suspension or terms of separation – pertaining to Burkett’s termination. Such documents were not provided by TSD.

In response to the CORA request, TSD returned a series of screenshots of text messages between Bliss and Burkett from Jan. 30 and 31 where the two discussed meeting. The screen shots did show that Burkett, as he claimed in comments made to the Surveyor on Feb. 13, informed Bliss he would be sending a letter. Burkett explained that he considered sending a letter, although he never specified what kind of letter, before ultimately deciding he would not send anything.

Considering the discrepancy between Burkett’s accounting of events and the school’s, Bliss was asked directly whether Burkett was involuntarily terminated or suspended for the remainder of the 2018-19 season on Jan. 30 or if he resigned voluntarily, she responded, “Mr. Burkett resigned his position.”

On the morning of Jan. 31, DeWall met with members of the boys basketball team and informed them that Burkett resigned his position the previous evening. In a letter sent to parents of the BHS basketball players, obtained by the Surveyor from TSD Public Information Officer, Michael Hausmann, Bliss wrote:

This morning Assistant Principal Mr. DeWall met with members of our boys basketball team regarding the composition of the coaching staff and I wanted to reach out to you to touch base regarding what was discussed today. Head coach Mike Burkett has resigned his position with the team effective immediately.”

According to one BHS basketball player, who spoke on the condition of anonymity, most players on the team did not believe Burkett would depart the program voluntarily midseason and expressed their displeasure with the situation to DeWall in that morning’s meeting; the decision to terminate Burkett with six games remaining in the regular season was not well-received by the young men on the team.

“Coach Burkett told our class (senior class now) that we needed to buy into what he was teaching us, that it’d all work out in the end and in the coming years. He taught us what is important not only in basketball, but in life. And he took in every kid as (if) he was one of his own,” one player said.

Burkett has stated repeatedly that he is not seeking reinstatement nor is he attempting to get Bliss, DeWall, or anyone in TSD administration reprimanded. For Burkett it’s a matter of principle. The coach explained at length that sticking to principle and standing by one’s word are values he has worked tirelessly to impart to the young people with whom he works, both as a coach and as an educator.

Burkett was deeply unhappy with BHS classifying his separation from the program as a resignation, which he vehemently denies, and explained what troubles him most is the message it sends to his former players. “That’s not the message you send to our kids. It’s not how the world operates. You don’t ask kids to invest for years for a goal and then remove the leader of their goal two steps or a step away from achieving it. That’s just the wrong message to send to kids,” Burkett said.

“We under-achieved, we did. That’s something we have to accept … and a lot of that falls on my shoulders, and I can accept that responsibility,” Burkett said. “We never quit, we never quit, we got better, but we never quit, and those kids know how much I care about them, they know that I love them.”

Editor’s note: The Surveyor will follow up with more on this story as it becomes available.