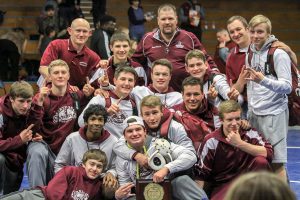 Berthoud High School’s wrestling team celebrates the Class 3A Regional Championship at Valley High School in Kersey on Feb. 13. In addition, the team qualified 13 wrestlers to the state tournament that will be held at the Pepsi Center in Denver starting Thursday.
Karen Fate / The Surveyor

They took Saturday night and Sunday to enjoy it. But come Monday afternoon it was back to business as usual for the Berthoud High School wrestling team.

The Spartans, competing at Platte Valley High School in Kersey on Feb. 13, won the team regional championship and along the way qualified a whopping 13 wrestlers (out of 14 weight classes) for the upcoming state tournament. The 13 state qualifiers are the most in BHS history, a feat all the more impressive considering the decades-long success the Berthoud wrestling program has enjoyed.

While the team regional championship, made possible in part due to individual regional titles for five wrestlers: Matthew Bailey (132 pounds), Kyler Bailey (138), Ben Poirier (152), Jimmy Fate (160) and Chad Ellis (195), is an accomplishment of which the team is proud, the Spartans are fully cognizant their absolute goal of the season–winning the team state championship–is yet to be realized.

“Everyone wants to win all the matches throughout the season, but to peak at the right time as a team and make a run at the state title this year, that’s been our goal as a team this season,” said Fate, who pinned Platte Valley’s Austin Albrighton in 1:19 to win his third-consecutive regional championship. Fate competes this weekend for a school-record-tying third consecutive state title.

“We’ve had some pretty high goals since the start of the year to push for a state championship, and taking 13 gives us an opportunity to score more points,” Berthoud Head Coach Scott Pickert said following the regional tournament. “We’re going to be in a dog fight with Valley and Dolores Huerta, and we’ve got to have another good week, but having the numbers helps … it takes a whole team to compete for a state championship.”

Of Berthoud’s 13 state qualifiers, four – Kyler Bailey, Matt Bailey, Ellis and Fate – competed at state last year. Having that experience on the team is something Pickert believes will be of aide to Berthoud during the practice week in the run-up to the state tournament.

“We’ve been very fortunate to have some kids in our room who’ve been very successful; Jimmy Fate and Chad Ellis have won before, and those two and some others know what it takes.”

Kyler Bailey will make a return trip to state after his first-place finish in regionals. Wrestling in 138s, the senior pinned Platte Canyon’s Christian Zimmerman in just 58 seconds in the quarterfinals and then advanced via a 22-4 technical fall in the semis. In the finals Bailey took a 2-0 lead with a takedown in the first that he extended to 8-2 after the second, thanks to another take-down, an escape and a near-fall for three points. Bailey allowed Dylan Yancy to score two on a reverse in the third but held on for the 8-4 decision to take the regional title.

Kyler Bailey’s younger brother Matthew Bailey, in the 132-pound class, also took the regional crown and will return to state, where he finished runner-up in 2015. Matthew Bailey explained that having had the state experience last year will aide him in his preparation this go-around. “It’s a stressful environment with everyone watching you but, being there before, it will relax me and help me to work my moves more,” Bailey said. “It’s a lot more comfortable knowing how it is.”

Matthew Bailey won his title bout over Platte Valley’s Adrian Rodriguez by a 6-4 decision. Evenly matched, Bailey scored two on a take-down at the very end of the first period, a score that proved decisive in the match.

“In the first period I knew that I only had like 20 seconds left and I had to go all-out, so I was going to go as hard as I could to get those two points, because it’s crucial to score in the first period and get the first takedown,” Bailey said.

Berthoud senior Ben Poirier in 152s, who missed state by a hair in 2015, overcame injuries sustained in a motorbike accident – a dislocated toe and two broken bones in his foot – to take the regional crown.

Poirier won his quarterfinal bout by pinning Platte Valley’s Chance Faulk in 3:25 and then winning a 9-1 major decision in the semis to advance to the finals. In the title bout against Matthew McNeil of Clear Creek, Poirier proved to be a technician on the mat. The senior scored on one take-down after another and nearly pinned McNeil in the first period, earning three points for the near-fall to hold a commanding 12-2 lead after the opening two minutes.

“I don’t try to pinpoint on one thing, I just try to see what happens and go with the flow of it,” Poirier explained. “I’m good on my feet, that’s where I’m most comfortable at and mostly I go for take-downs and just try to get as many points.”

Poirier quickly scored another seven points in the second period, allowed McNeil only two, and won the match via technical fall, 19-4, to take the regional championship.

“Ben has just put a ton of work … he and Kyler [Bailey] have been busting their butts all season as workout partners. I’m really happy for Ben because I know it hurt last year to not be a qualifier,” Pickert said when asked about Poirier. “He set his goals high and he’s having a great season, and we’re looking forward to watching him continue his great season at the Pepsi Center next weekend.”

Ellis, who has a 29-2 record this year and has committed to play college football, will be going for a second-consecutive state title as he wrestles the final competitive matches of his high-school career. Having bulked-up from 170 to 195 pounds this year, Ellis has not appeared to have lost any of his explosiveness, all the while increasing his power. The senior enters state as a four-time regional champion and the top seed in the 195s, having won his semi-final and final bouts at regionals with falls in 1:09 and 1:24, respectively.

When asked about the team’s preparations before the state tournament, coach Pickert said, “We won’t do a whole lot different; we will look at some things that weren’t as sharp here at the regional tournament, like a typical coach we think there’s always things to improve on. We will grab each kid and look for a mistake or an area we can improve on so when we get down there hopefully we are more prepared.”

The Colorado State Wrestling Championship Tournament will be held at the Pepsi Center in Denver Feb. 18-20.