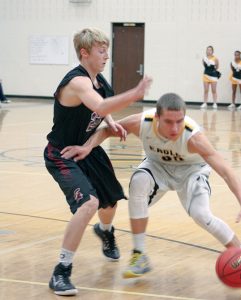 Even though they appear as such, it is something of a fool’s errand to view a game, irrespective of the sport, as a singular event rather than a long series of events. Viewing a basketball game as a sequence of possessions is what Berthoud High boys basketball coach, Mike Burkett, is trying like mad to get his team to understand.

The Spartans came up short in their final two games before the holiday break, losing by a razor-thin 59-58 final at home to Bishop Machebeuf on Dec. 15 and then in not-so-close fashion, 88-68, to Thompson Valley in Loveland on Dec. 18.

Against Machebeuf, Berthoud trailed for nearly the entirety of the game; by six points after the first quarter, by four after the second and by nine following three. Berthoud briefly held the lead, 39-37 at the 4:04 mark in the third, but Machebeuf responded with a 13-2 run in final minutes of the period. With 10 seconds remaining in the game, the Spartans re-took the lead when a trey from the left corner of the floor from Berthoud senior Dylan Adaza put the home team up 58-57.

The Spartans lead was short-lived, however, as Machebeuf guard Kyler Hensel drove the basket and made a lay-up to put his Bison back ahead. A last-ditch effort by the Spartans, executed precisely as Burkett had drawn it up, saw sophomore McCallan Castles drive the length of the floor, attack the basket and draw a foul. Unfortunately from Berthoud’s perspective, Castles’ first free throw bounced out of the rim to hand the Spartans their fifth loss of the season.

Out-scoring the Bison 17-9 in the final period proved to be too little, too late for the Spartans. Asked after the game about his team’s flurry of a fourth quarter, Burkett said, “I am proud of them. I’m proud of the fact that they didn’t quit, they’re not quitters. But again, just like against Greeley Central, this isn’t a game we lost at the end; it’s a game we lost in the first three quarters.”

A clearly frustrated Burkett continued, “From the beginning of time, we have talked about it being possession-by-possession and for three quarters we just throw away possessions, we give them stuff, we’re not patient. I’m really trying to get these kids to understand that every single possession matters.”

Burkett’s point is well-founded. The Spartans got into foul trouble early in the game, committed turnovers on three-straight first quarter possessions, thanks to bad passes, and closed the opening period by missing five consecutive shot attempts. Moreover, Berthoud made good on only two of nine free-throw attempts in the first half.

In the third quarter Berthoud proved unable to contain Hensel, who scored 12 of his game-high 30 points in the period while the Spartans shot a paltry 5-for-14 from the floor.

Berthoud started off strongly against Thompson Valley, taking a 15-9 lead, but the Eagles battled back, ending each of the first two quarters on scoring runs to take an 18-point lead, 47-29, into halftime. The deficit was too large for Berthoud to overcome as Thompson Valley maintained a nearly 20-point lead for the remainder of the game. Castles once again led Berthoud in scoring, hanging 27 on the board, while Adaza added 23.

The 20-point loss to Thompson Valley marked the third straight time the Spartans came out on the losing end and has Burkett, who says he is not interested in moral victories, searching for answers. The first-year head coach is adamant that his team is better than their record shows and has the talent to compete in the tough Tri-Valley Conference, but they must learn to play a complete game.

“It’s getting really frustrating to work your [tail] off every day and then just give things away when you get in the game,” Burkett said following the loss to Machebeuf. “We’re 3-5 but if you talk about how we played at Skyline, giving away the Greeley Central game, giving away this game, we could be 6-2 right now. The only team we’ve really played that is that much better than us was Lutheran.”

Berthoud, now 3-6 on the season, will work on shoring things up over the holiday break before traveling to Erie (1-6) for the opening game of Tri-Valley Conference play on Jan. 5.