In 2022, Berthoud voters will get to elect a new member of the United States House of Representatives.

A new congressional district map for the state was approved last week by the new Colorado Independent Redistricting Commission and Berthoud will be part of the new eighth congressional district (CD). The proposed map must first be approved by the Colorado Supreme Court, assuring it is in line with the Colorado Constitution and other federal statutes, but the court is expected to give its thumbs up this November.

In the 2018 election, Colorado voters approved Amendment Y, which created an independent, bipartisan commission to handle how the state’s congressional district lines are drawn, i.e. to decide on how the broad and diverse communities of Colorado are represented in the United States House of Representatives. 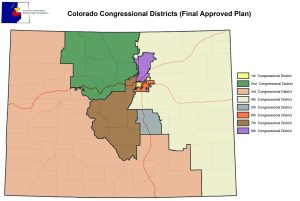 Due to the incredible population growth in the state, the results of the 2020 national census reapportioned the state-by-state distribution of the 535 members of the U.S. House as a result of respective population changes. Colorado was hence awarded an eighth representative.

The commission that drew and approved the maps, in accordance with Amendment Y, was comprised of 12 citizen members (not elected officials) with four registered Republicans, four registered Democrats and four unaffiliated voters, agreed by an 11-1 vote last week to approve the latest map, which moved Berthoud in the newly created eighth CD. The new district, and thus Berthoud’s new representative in Congress, will take effect in the 2022 midterm elections.

“The thousands of public comments from Coloradans, diligent map-making from the staff, and thoughtful discussions from the commission are all what led us to this moment and it has been an honor to chair the first Colorado Independent Congressional Redistricting Commission and hope we’ve set a standard for other states to follow in the future,” said commission chair Carly Hare, in a press release last week.

As stated in the Colorado Constitution, the new congressional districts must, “have equal population, justifying each variance, no matter how small, as required by the U.S. Constitution; be composed of contiguous geographic areas; comply with the federal “Voting Rights Act of 1965,” as amended; preserve whole communities of interest and whole political subdivisions, such as counties, cities, and towns; be as compact as is reasonably possible; and thereafter, maximize the number of politically competitive districts.”

Furthermore, the law states that, “districts cannot be drawn for the purpose of protecting incumbents or declared candidates of the U.S. House of Representatives or any political party, or

What do the changes mean for Berthoud?

First and foremost, Berthoud will no longer be part of the second CD, which also included the neighboring cities of Fort Collins, Loveland, Boulder, Louisville and Lafayette as well as most of Jefferson County in the western Denver suburbs and adjacent mountain communities of Clear Creek, Gilpin, Grand, Summit and Vail Counties. The reliably Democrat district has been represented since 2016 by incumbent Congressmen Joe Neguse (D).

Rep. Neguse will remain in the second CD, an assumed “safe” Democrat seat, that will include the cities of Fort Collins, Boulder and Erie, portions of Longmont, Lafayette, Louisville and Superior as well as less populated mountain counties, including most of Larimer, to the direct west.

The new eighth CD includes Berthoud and much of the north U.S. Hwy 85 corridor including Greeley, Johnstown, Milliken, Platteville, Firestone, Frederick, Fort Lupton, Dacano and portions of the north Denver metro suburbs of Brighton, Thornton and Broomfield. It is the CD with the largest portion of Hispanic voters, with just north of 35%, and has the lowest partisan voting index of the state’s eight CDs based upon the results of the 2018 and 2020 elections.

Interestingly, Berthoud will not be part of the same district as its nearest neighboring municipalities to the north and south. Most of Longmont’s population resides in the aforementioned second CD, represented by Democrat Neguse, while Loveland is placed entirely within the fourth CD, represented by Republican Ken Buck; the fourth CD also includes Windsor, Wellington and the entirety of the Eastern Plains counties.

A detailed look at the approved map that will be submitted to the Colorado Supreme Court can be found at: https://redistricting.colorado.gov/ .