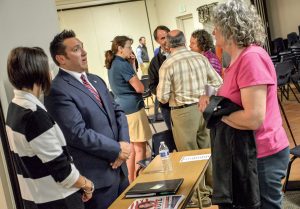 Berthoud trustee candidate Kevin Pischke, left, is pictured with his wife, Kendall, at the candidate forum Monday night as he speaks with residents.
John Gardner / The Surveyor

The need for a local recreation center was the topic of discussion at the 2016 Berthoud Trustee Candidate Forum at the Berthoud Community Center Monday night. The event was hosted by the Berthoud Weekly Surveyor and about 65 people attended.

Nine of the candidates attended the event, including Pete Cowdin, who is running unopposed for mayor. Candidate Brian Young was not at the event. In a message to the Surveyor Tuesday, Young indicated he is no longer actively seeking a seat on the town board.

“Due to a need to spend more time with a startup business I am currently working with, I have decided to no longer actively campaign for a seat on the town board,” Young said.

“For 20 years people have expressed an interest in having a recreation center,” said candidate Jeff Hindman. “The only question is how to fund it.”

Candidate Patrick Dillon spoke briefly about ideas he’d like to see discussed, like his proposal of a sales tax rebate for qualified seniors, a youth advisory commission to help with community service projects, a permit relief fund for local businesses, and a summer internship program for local youth. But he too spoke of the importance of a recreation center.

“Last but not least, and you’ve heard it from everyone else here tonight, we need a rec center,” Dillon said. “I don’t care how we do it; whether it’s a rec district, or if we’re asking voters to approve a sales tax increase, this is something that’s been on the mind of every single one of our neighbors, and we just need to do it.”

The need, and more specifically, the want, of a recreation center is obvious. Paying for it is the real discussion that needs to be had.

At the March 8 Berthoud Board of Trustees meeting, it was announced the town is ready to assemble an advisory committee specifically for the purpose of gathering information pertaining to a facility on the Waggener Park property. The town is trying to separate discussions of the Parks, Open Space, Recreation and Trails Plan to narrow the focus on each individually.

“To date we have had two meeting with the public to gather input for the new PORT plan and a great deal of the discussion has pertained to the proposed activity center,” read a memo to the trustees from town staff for the March 8 meeting. “We feel it would be best to separate the two projects at this point in hopes of making better progress on each.”

Attorney Bruce Fickel, who’s assisting the town on potential funding avenues, presented options at the March 8 meeting in the forms of a Great Outdoors Colorado (GOCO) grant, or a grant from the Department of Local Affairs (DOLA) that come from the state’s oil and gas revenues. However, both options pose their own obstacles: GOCO grants are typically reserved for “outdoor” facilities such as parks, while the DOLA grants may be more difficult to get with lower revenues from lower gas and oil prices. DOLA also requests a dollar-for-dollar match from the town and a business plan on how the facility would be funded.

“I am unaware of any way the town would be able to build and financially support a facility of that magnitude without the formation of a recreation district which, at least in my opinion/plan, would be the second phase of this project after we prove to our citizens we can build and operate this project,” Fickel wrote in the memo.

That’s an aspect several of the candidates supported.

“If elected, I will vote to put a rec center district on the ballot in November,” Hindman said.

Candidate William Karspeck, who coincidentally worked as a recreation center supervisor at Colorado State University, said he too would support a recreation district.

“I agree with a recreation district,” Karspeck said. “We could pull money from a larger amount of rooftops, and [a recreation center] would be great for our youth.”

Candidates’ speeches from the forum will be available at Berthoudsurveyor.com under the “Election 2016” tab later this week.