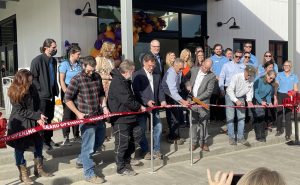 Photo by Dan Karpiel – On Saturday morning, Berthoud Mayor Will Karspeck (center) led the ribbon-cutting ceremony for the opening the new Berthoud Recreation Center at Waggener Farm Park. Karspeck, along with Town Administrator Chris Kirk, Deputy Town Administrator Jeremy Olinger and Director of Recreation Amanda Gustafson, spoke eloquently of the time and effort put into the planning, design and construction of the facility, thanking the contractors, engineers and town staff who poured in countless hours to bring the rec center and associated amenities at the park into existence. In an uplifting and unifying speech, Karspeck spoke of while there may have been some debate about the facility, “Berthoud is a village,” and the rec center should be enjoyed by all. In his prepared remarks, Kirk stated, “this facility will be transformative for the town.” Following the ceremony, which was attended by over 100 people including Larimer County Commissioner Jody Shadduck-McNally, Berthoud school board representative Stu Boyd and Thompson School District Superintendent Marc Shaffer, residents got to tour the facility, swim in the pool, play basketball in the gym, exercise in the fitness room and play on the climbing wall. Throughout the day a number of demonstrations of various group fitness activities such cycle fit, yoga and Zumba were offered free of charge.