By fall Mark Whaley wants to have his showroom finished to display some of the showers and bathtubs he sells through Re-Bath.

Whaley, owner of Re-Bath of Northern Colorado, relocated his bathroom remodeling franchise from Boulder to Berthoud in April 2016, moving into a 7,500-square-foot building at 1017 N. First St. 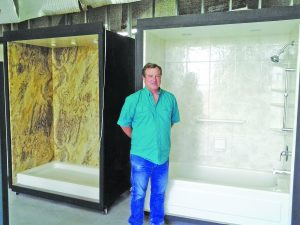 Mark Whaley, owner of Re-Bath of Northern Colorado, stands in front of a few of the bathtub and shower displays in the showroom under development in Re-Bath’s new location in Berthoud.

Re-Bath, located in 150 cities nationwide, offers complete bathroom remodels and tub and shower updates; and sells showers, bathtubs, toilets, sinks, cabinetry and flooring. The remodels and updates can freshen-up the look in the bathroom or address a variety of issues, such as mold and mildew, leaks, functional problems, and a need for more storage.

Whaley, who has operated his franchise for 18 years and lives in the Fort Collins area, originally opened his business in the Longmont area for three years before moving to Boulder, where he remained for 14 years.

As his business grew, Whaley wanted to move into a larger space with a bigger showroom — the showroom will be 1,000 square feet with the warehouse in back.

“We’re doing a full showroom here, so customers can look at our colors and options,” Whaley said.

Work on the showroom, which will feature product displays and samples, began in February and will be completed by September or October, he said. At that time he likely will hold a grand opening celebration and will extend his hours.

Currently the franchise is open 9 a.m.-3 p.m. Monday to Friday, and once the showroom is open the hours will be 9 a.m.-6 p.m., with additional hours on Saturday.

Whaley owned a plumbing company in Boulder for about 10 years before he purchased a Re-Bath franchise.

“I’d seen a need back in the day when I was looking around for things,” Whaley said, explaining at the time there were 2,000 licensed plumbing contractors in Boulder.

Whaley found mention of Re-Bath in a magazine and decided to give the business a try, continuing his plumbing work part-time for three to four years as he phased it out and concentrated more on his franchise. He chose Re-Bath because he liked the company’s approach and the materials it uses, he said.

“They had a different way of doing bath remodels,” Whaley said. “It’s solid-surface materials. People love the look of tile. Here we can give you solid surface materials that look like tile without any of the tile headaches.”

Over time, tile can develop mold and mildew and be hard to clean, according to Whaley.

The material for Re-Bath’s baths and showers come in large sheets of solid-surface polymer that are cut down to fit the size of the fixtures. Whaley provides a lifetime warranty for the material and labor for each of his installations.

“It will never chip, crack, fade, peel or stain,” he commented.

The material comes in patterns like slate, smooth, smooth tile, Newport, old-world Tuscan, mosaic and subway, and the colors include almond, biscuit, umber, rock creek, marble and white. Re-Bath offers 26 different colors and DuraBath natural stone, which is in a solid piece.

“We can use any of these different patterns on different colors,” Whaley said.

Whaley offers free design consultations in the customer’s home and will do the design on site or invite the customer into the showroom to select products and materials. He orders the materials, and once they arrive, schedules the installation, which for a typical bathroom can be completed within five days. He works with a staff of seven and does not have any subcontractors that he said can extend the project time to several weeks.

“What I like about it for the homeowner is that we control the project from the sale down to the finish,” he said.

Craig Belshe hired ReBath to remodel the master and guest bathrooms in his new home in Estes Park prior to his move there in late August from Denver.

“They were very good about scheduling. They basically order all the materials in advance of the job, and the crew doesn’t leave until the job is done,” Belshe said. “They were right on-time with their schedule, which is unusual for remodelers.”

Whaley and his wife Joni used to live in Berthoud. Their son Jeremy is a graduate of Berthoud High School. They also have a daughter and two grandchildren.