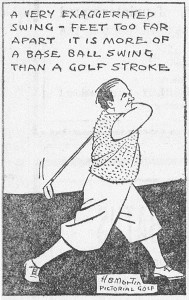 On Jan. 19, 1933, readers of The Berthoud Bulletin were greeted with news that “A group of men in Berthoud and vicinity have leased a plot of ground and organized a golf club. This club is to be started and kept up at a small cost per member and it’s advisable for those interested to see D.M. Conroy or some member of the club about the low cost of joining. The club has been organized for the purpose of obtaining cheap, clean and enjoyable amusement for the people of this community.” By spring the dream became reality, and for a few years in the 1930s Berthoud bragged about its golf club and nine-hole course west of town.

The project came to life when a group of local men secured a site for the golf course near the foothills from W.R. Benson. The local newspaper reported that the site was “reached by turning west from the pavement (Highway 287) at the Little Thompson bridge (Rd. 4E) and going four and one-half miles west.” The course sat north of the county road and east of the first hogback (foothill).

Next, the men organized the membership. P.D. Grommon was elected president; with H.D. Williams, M.L. Fairbairn, and W.C. Bunyan assuming the offices of vice-president, secretary and treasurer. The membership fee was set at $3 per year and interested parties from Longmont, Mead and Johnstown were allowed to join.

On Jan. 26, 1933, a membership committee that included D.M. Conroy, Lloyd Edwards and Paul Stranahan announced in The Berthoud Bulletin, “This course is a 9-hole with a 36 par…The fairways are all laid out and are waiting for rain to settle the greens so they can use gravel and oil to better advantage. It will soon be the best golf grounds in the country, with native sod and everything to wish for in the way of hazards, etc. So let everyone join and boost this sport and have a good time and get sunshine and pure air while you play this fascinating game.”

In late May the first tournament was held at the course west of town. The Berthoud Bulletin reported, “Maybe neck-and-neck is not just the way to speak about a golfing contest, but we do not know a thing about golf, so that is the way we tell about the tournament at the Berthoud course last Sunday forenoon. The “Hookers” were teamed thus: F. Fairbairn and R. Osborn, O. Kahler and S. Davis, Brush and Gillet, J.B. Davis and Ellsworth Stepp, John W. Waggener and H.D. Williams. The “Hookers” yardage was 42,169. Opposed to them were the “Slicers” teamed: M. Fairbairn and Nelson, G. Davis and Bashor, Herman Smith and Edwards, E.E. Stepp and E. Sloan, Stotts and Gammill. “Slicers” had a total yardage of 42,649—480 better than their opponents. But the “Hookers” beat the “Slicers” ten strokes on the two full rounds, making the honors fairly even. Morley Fairbairn made the full rounds in 85 with a yardage of 4,451, while Frank Fairbairn made the two in 81 with a yardage of 4,759.” Club championship play took place later that fall, but results were not announced.

The late Bob Turner, Berthoud native and namesake of Turner Middle School, played at the course as a high school student in the late 1930s with his chums Bill Hanna, John Waggener and Ken Hertha. According to Turner, the native grass fairways were mowed but barely discernable from the rough. Players were expected to rake each oiled-sand putting green before moving on to the next hole and directed to keep a watchful eye on the rattlesnakes that populated the area in great numbers.

The June 17, 1937, issue of The Berthoud Bulletin confirmed the rattlesnake danger. The newspaper reported, “Any golf course should have plenty of hazards to make the game interesting. Berthoud course has many in the way of land lay, and then it has rattlesnakes—and we rate rattlers hazard No. 1. But there is one big rusty rattle tail less since J.B. Davis got that old fellow a few days ago. The snake he killed had just made a meal of a rabbit when J.B. found him in some weeds near the fairway. There were seven rattles and a button—length about three feet.”

By the early 1940s, it appears that the Berthoud Golf Club had disbanded. The nine-hole course reverted to prairie and local golfers were left to travel to Longmont or Loveland to play.