Project 1220 is seeking donations for the homeless

As the holidays approach, Berthoud couple Chad and Brooke Knowlden want to ensure the local homeless have at least a few of their needs met.

The Knowldens, alongside Brooke’s parents Dennis and Minetta, also of Berthoud, distribute items to the homeless Dec. 20 through Project 1220, referring to the date of the annual homeless outreach program. They will collect items for this year’s event October to December—they have a list of especially needed items on their Project 1220 Facebook page.

“People are so grateful for what we take for granted, and that’s so humbling,” Dennis said. 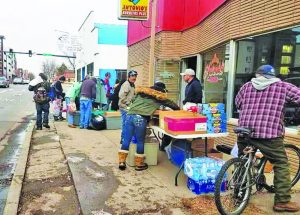 Courtesy photo – Chad Knowlden of Berthoud, standing at the table, helps distribute supplies to the homeless last year during Project 1220, which he and his family hold each year on Dec. 20.

Since the event’s start in 2016, the distribution site for Project 1220 frequently changes, as does what is distributed, though there are some repeat categories, such as clothing, winter gear, blankets, toiletries and snack items.

Last year, the items were distributed across the street from the 137 Day Center, House of Neighborly Service’s outreach service for the homeless in Loveland. The Knowldens set up tables on the sidewalk in front of the former Antonio’s Burritos shop and let visitors select what they needed.

“Despite their situation, many of them hold on to the faith that things will get better,” Minetta said. “Whatever it might be, they’re very positive and thankful. It’s just little things you can do for them that makes them feel more human.”

Chad and Brooke, both Berthoud High School graduates, began Project 1220 a year after they helped their church, Rez.Church, hand out prepackaged bags to the homeless in downtown Fort Collins. Several said they received things they didn’t want or need and that there were other things they needed instead. Brooke did some research, and Chad’s parents, who volunteer with other homeless outreach services, joined the effort to form Project 1220.

The Knowlden couples started with a mobile store, consisting of their vehicles that they drove throughout Loveland to find the homeless. To outfit the store, they solicited donations, receiving a large amount from Brooke’s aunt and uncle, Jayme and David Shipley, gathered from garage and clearance sales.

Last year when the Knowldens could set up the store at a stationary site, they had their largest turnout of 50 to 60 people, compared with 40 people in previous years. They also served a meal, prepared by a group of former homeless from Fort Collins. Needing more donations for that event, they placed donation boxes at two local businesses, Kô-fē House and Kô-fē Drive-Thru, and Berthoud High School. This year, they are working out donation sites at businesses, churches and schools as well as the collection dates.

“Every year we get a little more progressive with what we’re doing with Project 1220,” Brooke said, adding that at the same time, “Every year it’s starting over. Every year we start with a plan. That’s why we call it organized chaos. We’re not guaranteed the same help as we got the prior year.”

This year, the Knowldens hope to bring in two other couples to help out in Loveland and to add Longmont as a second site, plus they want to double the number of donations they collect. They will check with churches and businesses to see if they can access space for the Dec. 20 distribution date, plus want to serve a meal, possibly potluck style from various donating sources. Once they have the details confirmed, they will begin distributing flyers about the event.

Eventually, the Knowldens would like to expand Project 1220 to Fort Collins and Boulder and beyond, depending on volunteer numbers and donation amounts. They also would like to apply for nonprofit status.

“Our biggest thing is, a lot of organizations, they help people outside of our community and state and country,” Chad said. “We really like to help our neighbors who we see on the street. It’s important to help the people we live with.”

The Knowldens offer a second event, a day of service called 1020, which they started last year to help individuals and families with yard cleanup and small home maintenance projects. To do the work, the Knowldens plan to team up with a small group of volunteers and Chad’s business, SR Home, a Loveland-based electrical and remodeling service (SR refers to Shotgun Rider).

Last year, the Knowldens didn’t identify a family to help, but hope to get at least one or two this year, Chad said.

“We are blessed,” Brooke said. “We don’t have needs and wants, and others do. We would like to help them with that.”

Brooke and Chad named the event after the day they married, which was in 2018. They met Dec. 20, their inspiration for naming Project 1220.

“Everything we do has a meaning behind it,” Chad said.