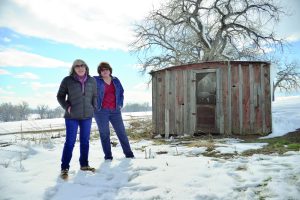 Peggy Malchow Sass, left, and sister Jean Malchow stand next to an 1800s beet shack that remains on their family farm southwest of Berthoud. The sisters agreed to sell the property with associated water rights to Larimer County Open Lands Department in an historic agriculture land preservation deal.
All photos by John Gardner / The Surveyor

Peggy Malchow Sass stood inside the iconic red barn at the entrance of the Malchow Farm and spoke about the time she spent with her late father, Howard Malchow, as a child; she described early mornings spent milking cows.

“It was just nice to spend that time with him,” Malchow Sass said.

When Malchow Sass and her sister Jean Malchow talk about the family farm, their connection to the land southwest of Berthoud is as evident as weathered red paint on the barn’s exterior.

“It was a really great place to grow up,” Malchow Sass said.

Peggy and Jean are happy the farmland where they were raised, and their father spent his lifetime farming, isn’t going to become a residential development and will remain agriculture land for generations to come after the Larimer County Board of County Commissioners unanimously approved the $8.4 million acquisition of the Malchow Farm and the property’s attached water rights at its Tuesday meeting in Fort Collins.

The sisters knew from the beginning they wanted to see the land and water shares remain together after the sale, but it took some time to get an agreement in place.

“We knew that selling it was always on the horizon, we sort of assumed that development was the way it would go and that’s why we took so long,” Malchow Sass said. “We just couldn’t stand that thought that it might be developed.” 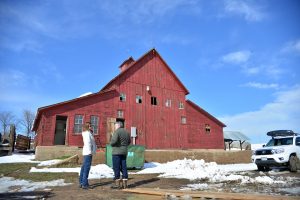 They finally accepted that they may have to sell it to a developer, until they were approached by the Larimer County’s Natural Resources and Open Lands Department land agent, Alex Castino, in September 2015. The 211-acre irrigated farm is located north of the Little Thompson River adjacent to the west side of Highway 287 and south of CR 6, just outside of Berthoud’s Urban Growth Area to the southwest, and includes 240 Colorado Big Thompson Water shares and 16 Handy Ditch water shares.

The property will continue to be farmed by a lease agreement with proceeds going back to the county’s Open Lands Department. This deal satisfies the sister’s dream of keeping the property a working farm.

“We just couldn’t stand to see it developed,” Malchow Sass said. “Knowing that it’s going to stay a farm is really satisfying to us.”

The water for the property fills the Handy Ditch that gets water from the Big Thompson River, Malchow Sass said, adding that it’s positive to keep the water with the land, not only for the farm, but for all the other nearby ranches and farms that utilize the Handy Ditch water. 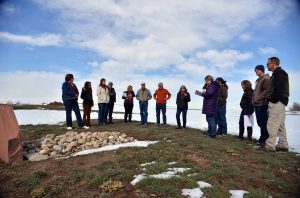 A group involved in one way or another with the deal for Larimer County to purchase the Malchow farm listen to Peggy Malchow Sass talk about a pioneer grave that has been on the farm since the mid 1800s. A grave marker was placed some time ago by the Berthoud Historical Society.
John Gardner / The Surveyor

Per the agreement, the water will continue to be used on the property seven out of 10 years but will also be available to local municipalities during times of drought. Acquiring the water rights is an innovative aspect of the purchase, according to Larimer County Commissioner Tom Donnelly.

“I think this is a great opportunity to really talk about what we want to do with water and how we want to see water addressed,” Donnelly said. “The last thing we want to see is a lot of irrigated farm land bought then dried up. We want to make sure that we keep some of those resources with the land so that they can be used in perpetuity.”

Craig Godbout, program manager for the Colorado Water Conservancy Board’s Alternative Transfer Methods grant program, agreed with Donnelly, saying the CWCB’s mission is to help preserve irrigated Ag land. And this is one of the first agreements that will have the water available for use by municipalities during time of drought.

“[Agriculture] is our second biggest industry contributing to our economy here in the state, and this project fits in really well with the state water plan because it helps close that municipal-industrial gap without permanent Ag dry-up,” Godbout said.

This is only the second alternative transfer of water agreement that’s been completed, according to Godbout, and it also creates a new mechanism that can be used as a model for future projects. It’s also an innovative way for the county to explore partnerships with municipal partners and some local farmers, Donnelly said.

The property consists of high quality agricultural soils, with approximately 188 irrigated, 18 pastures and five farmstead acres, according to a natural resources department report. Two homes remain on the property; one built in the 1860s and the other built in 1947. There’s also the scenic red barn, once used to milk cows, located at the farm’s entrance, and a beat shack that was built in the late 1800s.

This land adds to the county’s open space catalog. The county’s interest in this particular parcel grew from its updated 2015 Open Space Master Plan that included citizens’ request for preserving irrigated farm and agriculture land according to Kerri Rollins, Open Lands Program manager.

“When we looked at our inventory across the board, we’ve done a whole lot of ranchland, we’ve done a really good job with ranchland; we’ve bought a few irrigated farms and conservations easements that we own, but they are certainly much smaller,” Rollins said. “So this opportunity happened to come along at the right time and at the time of updating our master plan. We’re excited to be moving forward with it.”

Donnelly credited the county’s Agricultural and Natural Resources Department for its work on making this deal happen and said that this deal has a wealth of opportunities. One of those opportunities could include an educational site for the Thompson School District’s resurrected Future Farmers of America program, where students who could use the land for a hands-on approach to agriculture, or using the farm as an incubator for organic farmers.

The Malchow family has worked with the Berthoud Historical Society to preserve some of the property’s historic features, including the beet shack and a pioneer grave.

One of the oldest ditches in Larimer County, the Eaglin Ditch, is located on the property. And the property also is located within the medium-to-high regional trail priority area for the Berthoud to Carter Lake Regional Trail Corridor.

Berthoud Trustee and Larimer County Open Lands Advisory Board member Paul Alaback said it’s a project he’s really excited about; one reason in particular is its proximity to Berthoud and its visibility from Highway 287.

“Because it’s right on 287, that means all these educational opportunities are far better here than any other place I can think of,” Alaback said.

“Berthoud really celebrates agricultural history and has a very active historical society, and it’s hard to imagine a property that would be so good with so many attributes and in the right place such as this,” Alaback said.

The county’s Open Lands Department is actively pursuing grant funding to reimburse a portion of the county’s investment to the conserve this property and has already received a $178,425 grant from the Colorado Water Conservation Board to develop the Alternative Transfer Mechanism and water-sharing agreement.

The county will pay $8.4 million for the land and its water shares with the intent of keeping it an active farm and making the water available to municipal providers in drought years. The land is valued at $1.6 million while the water rights are valued at nearly $6.9 million.

Rollins attended Tuesday’s Berthoud Board of Trustees meeting and requested a $100,000 contribution from the town’s Open Space Tax Dollar fund to help pay for the land acquisition. Trustees advised town staff to see what could be done to participate in this partnership.

The county is also seeking contributions through Great Outdoors Colorado and a private foundation, according to a report from the Department of Natural Resources. The land purchase will be finalized in April.