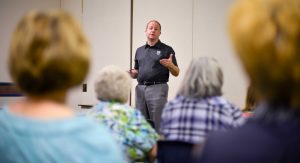 U.S. Representative Jared Polis, D-Colo., speaks to constituents at the Berthoud Community Center on Aug. 8. The Congressman is touring the 2nd Congressional District gathering input before returning to Washington D.C. in September.
John Gardner / The Surveyor

United States Representative Jared Polis, D-Colo., visited with constituents in Berthoud on Aug. 8 at the Berthoud Community Center where discussion focused on two main issues: The Iran nuclear deal and the pending government shutdown over Planned Parenthood funding. However, Polis made a point to talk about other more local issues, including the widely discussed Interstate 25 lane expansion as well as possible changes to federal education policy.

Polis is currently traveling around Colorado’s 2nd Congressional District during August, hosting several town hall meetings to gain constituents’ feedback on the hot topic issues. He said the big issues in the few northern Colorado meetings hosted prior to the Berthoud meeting Saturday have all included Iran, Planned Parenthood, education, and Interstate 25.

“I-25 lane expansion remains one of the top priorities of residents who are frustrated with rush-hour traffic north and south from Berthoud and Loveland, and so we continue to work on that,” Polis said after the meeting, adding that transportation funding is a big issue currently, not only in northern Colorado, but nationwide. Polis told the group of roughly 30 that he is looking for a long-term transportation funding authorization rather than another short-term fix.

“There is no good reason to do a short-term authorization,” he said. “The only reason that keeps happening is because Congress is kicking the can down the road and doesn’t want to have a real discussion about how to do a long-term solution. So I’ve been pushing for a four, five or six-year transportation authorization.”

The second part to that deal, Polis said, is ensuring that the criteria in a transportation bill are favorable to funding projects that are important to northern Colorado residents, like I-25. He said it’s important that the criteria for the grants include opportunities for projects like I-25 based on ridership numbers, the interstate’s critical importance as a north/south freight corridor, and based on the projected growth of the northern Front Range.

“The project still stands on its merits,” Polis said. “Larimer County is one of the fastest growing counties in Colorado, so we should be able to do that.”

But when Polis opened the conversation up to those in attendance, it quickly turned to national security issues regarding the Iran nuclear deal that has made headlines for weeks since President Barack Obama announced a deal in July. When asked specifically about how he will vote on the issue by one of the attendees, Polis said he’s read the agreement, understands its implications and is still gathering information before a vote that is expected in September.

Polis listed what he considered pros and cons for the deal. The pros include that the agreement dictates Iran purge 97 percent of its current enriched uranium stockpile; provides inspections for some of Iran’s military facilities; and will push the breakout time for the country to get a nuclear weapon from three months to two years. However, a major con of the deal is terminating sanctions that ultimately will free up an estimated $50 billion in frozen funds that will now be available to Iran.

“I’ve read through it. I’ve had both classified and unclassified briefings on that and I’m still gathering information,” he said. “Just like anything else, it has pros and cons and it’s not an easy decision.”

“The part I’m gathering more information on now is the contingency; what happens if Congress says ‘no,’” Polis said. “When I make up my mind, I’ll certainly let everyone know, but at this point I’m still gathering information.”

After the meeting Polis said that in the recent town hall meetings he’s heard both opposition and support for the deal.

“At the town halls we’ve had, I feel that folks are more supportive of the deal to prevent Iran from developing nuclear weapons, but there are certainly passionate advocates on both sides of the issue,” he said.

Then the discussion went from one nuclear topic to another when an audience member brought up the federal funding for Planned Parenthood and the apparent pending government shutdown argument that’s brewing. Planned Parenthood has come under fire recently as videos with top Planned Parenthood officials were secretly recorded discussing the sale of aborted fetal tissue.

“Again, there are passionate advocates on both sides of the issue; I think most people don’t want to see government shut down over this issue regardless of where they fall,” Polis said after the meeting. “I think there is a lot of frustration that some members of Congress are even considering closing down the entire federal government, including veterans’ benefits, including highway construction, over where people are on this very heart-felt issue.”

Despite the conservative outcry, Polis said he’s heard support for Planned Parenthood from constituents at this and other town hall events.

“I think there is general support for making sure that women of all means have access to family-planning services,” Polis said. “I think there is some strong agreement about that and It’s good to hear from the different perspectives and try to realize that regardless of what perspective you come from, most people are pragmatists and want to see a government that works. And it’s my priority to try and make the government more efficient and streamline it, and for our country to live within its means and start paying off the national debt.”

Polis’ tour of the district continues through the month and ends with a town hall event at the Lafayette Public Library in Lafayette from 10:30 a.m. to noon on Aug. 29.