A police incident that triggered an emergency notification being sent out in Berthoud Monday afternoon ended peacefully when a wanted suspect surrendered to police.

The man, 49-year-old George “Alex” Martinez is suspected by Longmont Police Department (LPD) of robbing two bank in Longmont last week and is accused of being involved in a stabbing. 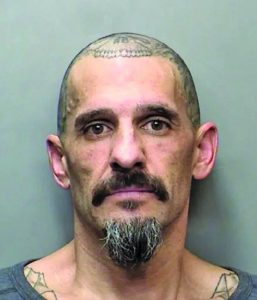 The event began at approximately 3:20 p.m. when the Larimer County Sheriff’s Office was notified by LPD that Martinez, who was believed to be armed and dangerous, with multiple felony warrants out for his arrest was confirmed to be located at a home in the 300 block of Victoria Street in Berthoud.

A LETA alert was sent out at 3:48 p.m. asking residents in the area of First Street and Welch Avenue, east to Hubbell Street to remain in their homes until the situation was resolved.

Multiple units responded to the location blocking streets in the surrounding area.

According to LCSO Lt. Jeff Vanhook who was onsite during the incident, police set up a perimeter around the home and made phone contact with Martinez. Thirty-eight minutes later Martinez exited the home, surrendered to police cooperatively and was taken into custody.

Residents were notified that the situation had been resolved and were able to resume normal activities at 4:35 p.m. via the LETA notification system.

Friday morning May 27, police allege that Martinez robbed a bank at the corner of 16th Avenue and Hover Street in Longmont and that he was witnessed fleeing the scene in a solid white cargo van. The van, with no markings or lettering, was recovered in a nearby neighborhood.

Martinez’ crime spree in Longmont continued Monday, when at approximately 10:45 a.m., he allegedly robbed a bank in the 400 block of Coffman Street before making his way to Berthoud.

Current charges against Martinez include parole violation, auto theft, 2 counts of robbery, domestic violence and 1st-degree assault with a weapon.