Please wake up with 10 fingers on July 5

Independence Day is a celebration of the United States of America. After all of the pandemic restrictions last year I have a feeling this Fourth will be a big one for many.

A friend of mine several years ago sent me a text message on the morning of the Fourth that read, “Just think today is the last day someone will be waking up with all ten fingers.” I laughed at the statement of dark humor but inevitably this celebration does produce a lot of trips to the ER. 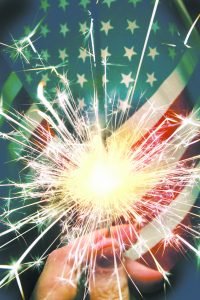 As fun as July 4th festivities typically are, injuries, particularly those involving fireworks, are a concern that celebrants should not take lightly. An estimated 11,000 people visited the emergency room for fireworks-related injuries in 2016, according to the U.S. Consumer Product Safety Commission. However, fireworks aren’t the only danger this time of year. In order to remain safe, individuals can heed these tips.

Keep your celebrations of our incredible country epic and safe this year.

The population of the United States on July 4, 1776 was 2.5 million – which is close to today’s population in Houston Texas.

On July 2, 1776, the Continental Congress voted in favor of declaring independence from Great Britain.

The Declaration of Independence was officially adopted two days later, marked by the ringing of the Liberty Bell at Independence Hall in Philadelphia.

The 4th of July wasn’t commonly celebrated until after the War of 1812.

The oldest 4th of July parade is said to occur in Bristol Rhode Island.

The Liberty Bell rings 13 times every 4th of July in honor of the original 13 colonies.

Denmark hosts the largest 4th of July celebration outside of the U.S. It has to do with immigration and the Danish-American Society buying some land in Denmark.

Americans typically eat 150 million hot dogs on Independence Day, “enough to stretch from D.C. to L.A. more than five times,” according to the National Hot Dog and Sausage Council.

John Adams, a staunch supporter of American independence and a representative for Boston at the First Continental Congress, felt that, after America gained independence from Great Britain, July 2nd was the correct date on which to celebrate American Independence Day. July 2nd was when the vote for independence took place. July 4, 1776 was when the Declaration of Independence was officially signed. Thereafter, Adams would reportedly decline invitations to appear at July 4th events in protest. In an interesting turn of events, July 4th would prove significant to Adams in another way. Both Adams and Thomas Jefferson, another key figure in American history, died on July 4, 1826, which marked the 50th anniversary of the adoption of the Declaration of Independence. TF207132