Pair of fifth place finishes for Spitz and Strong 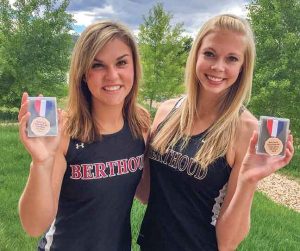 Berthoud’s Josie Spitz placed fifth in the pole vault and Alyssa Strong finished fifth in the triple jump at the Colorado state track and field meet, May 14-16.
Photo courtesy of Lisa Spitz / The Surveyor

May 18 started early with the Berthoud team van leaving at 6:30 a.m. headed for Jefferson County Stadium in Lakewood. Most of Berthoud’s athletes competed on the first day of the state high school track and field championships, May 14-16.

Berthoud High School junior Max Bump started the action off in the early morn, contending with some slippery conditions as the grass was still water-logged from the week of rain. Most of the athletes had a toss or two where the discus slipped out of their grasp or their feet slipped on the ring. Only two of the athletes had personal-best throws in the event at the state meet, most likely due to the conditions. Bump’s second throw was his furthest at 133 feet, 0 inches, placing him in 12th position. Austin Brant of Canon City won the event with a throw of 159-9.

Next up was Berthoud sprinter Lydia Lind who qualified to the state meet in the 100 meters. In the prelims, the BHS senior had an exceptional start getting out of the starting blocks quickly and led the field for the first 15 meters. But, even with the great start, Lind’s time of 12.87 seconds was not fast enough to make it to the finals. Nicole Montgomery of Lewis-Palmer ended up winning the event in 12.16 seconds. Lind finished in 17th place.

The girls’ 3,200-meter run was the next event on the track where Berthoud’s Kiah Leonard toed the starting line for her final race in a Berthoud uniform. Leonard moved up throughout the race and was in medal contention coming into the final 75 meters. Unfortunately, two girls had a stronger final kick to the finish and Leonard placed 11th with a time of 11:35. Katie Rainsberger of Air Academy won the race with a time of 10:49.

Berthoud’s Luke Spitz competed in the boys’ 3,200-meter run. Eric Hamer of Palmer Ridge led the race from start to finish completing nearly two miles in 9:22. Spitz chased the leaders throughout the race, eventually finishing in 16th place with a time of 10:5. The BHS senior signed with Colorado Mesa University last week, so he will have more opportunities to race Hamer throughout the next four years.

Alyssa Strong was up next in the prelims of the 100-meter hurdles. The first two finishers in each heat earned automatic qualifications to the finals. The three next fastest times also moved on to the finals. Strong placed third in her heat but just missed qualifying to the finals by 11 hundredths of a second. The junior ran 16 seconds flat in the prelims to finish in 10th place.

Josie Spitz and Kelly Chamberlain competed in the pole vault. The event started at 8-9, with all vaulters clearing the height. Thirteen vaulters continued to clear the next two heights, adding excitement to the competition. Chamberlain cleared 9-9 in a three-way tie for 11th place while Josie Spitz sailed to a personal-best height of 11-3. The junior finished in fifth place and became the first Berthoud Spartan to step on the medal stand this year.

Kristina Cavey competed in the high jump on Friday, May 15. Three of the entrants were knocked out of the event at opening height of 4-11. However, nine of the participants, Cavey included, were unable to clear the next height of 5-1 and finished in a nine-way tie for 11th place. The winner was freshman Rylee Anderson of Silver Creek who cleared 5-5.

Strong had one more chance for a Spartan to stand on the medal platform on Saturday in her best event – the triple jump. Reaching for every inch, Strong jumped just one-half inch less than her personal best to place fifth with a distance of 36-5. Anne Lauder of Evergreen won the event by jumping 37-9. Strong has improved over a foot from last year. If she keeps improving like that, she will have a good chance to represent Berthoud on the medal stand once again next year.