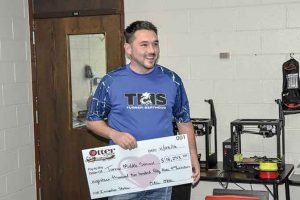 Christmas came early for Turner Middle School Createspace teacher Dan Champion and his classes. On Monday, Nov. 28, a contingency from OtterCares, along with TMS Principal Derrick Martin, called Champion out of his classroom. The surprised teacher saw a large check from the OtterCares philanthropic group. It was big in size and amount — to the tune of $18,253.

“Awesome. That’s awesome,” was the startled teacher’s initial reaction. “I didn’t think I had a real shot,” he added. “I never in a million years thought I would get the entire amount,” Champion said gleefully.

In August Champion applied for a grant from OtterCares, the charitable foundation for OtterBox company. His application was one of 50 OtterCares received. Only 19 were awarded funding.

Champion said the grant required a detailed listing of how he would spend the funds if he got them. “It was not just what I wanted, it’s about what they are asking,” Champion said of how he used his students’ input to determine what was needed.

He explained currently the program has six online 3D printers, but they are tied up every day. Many of the teachers at TMS want their classes to create items on the printers. This grant will help alleviate some of the printer-scheduling headaches.

Other areas that will benefit from the grant are the video editing stations. With the new money, Champion can get more equipment to do video production. Also, he wants to acquire a laser cutter.

Champion estimated the Createspace room is about 40 percent done. This money from OtterCares will help move it nearer to being completely functional.

For the grants given this year, OtterBox employees raised more than $100,000, and OtterBox matched those funds.

OtterCares is a charitable foundation and is part of the OtterBox company. The foundation’s website states, “We believe one young and inspired mind can change the world. The OtterCares Foundation champions innovative education that inspires youth to become entrepreneurs and philanthropists who create lasting and impactful change in their communities.”

At the end of the school day, Champion said every class cheered when he announced the amount of the grant and how it would help. “I’m excited. The kids will be super excited,” he said, summing up his feelings.