Once in a Berthoud Blue Moon

This year Halloween promises to have an added spook factor as a full moon rises in the skies above Berthoud on Oct. 31. Despite the many links between a creepy full moon and the frightening festival, the two occurring on the very same day is relatively rare. Having already had one full moon on Oct. 1 this year, Halloween night will also bring us a blue moon, defined as a second full moon in a calendar month. The last time Halloween and the full moon happened together was back in 2001 and it won’t come around again till 2039.

The moon has been associated with all things magic, mystical, and often spooky since humans very first gazed upon its changing cycles in the skies above. You only have to take a quick dip into folklore and mythology to find a multitude of tales about the powers of the full moon. From the Goddess Luna, riding her chariot across the night sky and inspiring madness in non-believers, thus making them ‘Lunatics’, to making certain cursed individuals sprout hair and howl into the night. Even in modern times a large majority of people still believe the moon can have a strange influence on people’s behavior. A 1995 study from the University of New Orleans found that as many as 81% of mental health professionals believed in the full moon’s power to affect people’s minds. 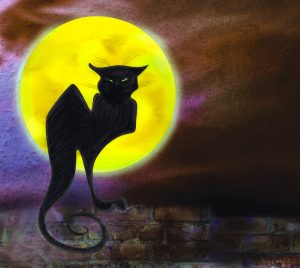 Taking the superstitions surrounding the magic of the moon and adding them to the spookiest day of the season promises a potent potion of mischief and mayhem but why do we even send the smallest household members out on the hunt for candy this time each year? Many view Halloween as a commercial holiday dreamt up by the confectionary companies to boost their profits but this actually couldn’t be further from the truth. The roots of this celebration reach back thousands of years and, despite having many modern twists, remain fundamentally unchanged.

Halloween’s origins date back to the ancient Celtic festival of Samhain (pronounced sow-in). The Celts, who lived 2,000 years ago, mostly in the area that is now the United Kingdom and northern France, celebrated their new year Nov.1. This time of year would mark the end of summer for the ancient people and preparations for a dark winter would begin. This included slaughtering any animals they thought might not make it through the winter to fill their stores. This was also a time when the elderly or infirm in the community started to pass away more often. These tangible links to death led the communities to believe that on the night before their new year the veil between the living and the dead became thin allowing the ghosts to wander in this world.

The Celts came up with lots of ways to keep evils spirits at bay on this frightful night, some of which are still recognizable to us today. They would light big bonfires to ward off the darkness, dress in costumes to confuse the spirits, and carve frightening faces into turnips to place in their windows scaring away spirits up to no good. Many would also leave out ‘treats’ to appease the malevolent ghouls from playing ‘tricks’ on them. It’s not hard to see how children would start to take advantage of going door to door for some goodies dressed as the creepy specters people feared.

As Christianity began to spread into Celtic lands in the ninth century the Church often tried to adopt Pagan festivals into its own sanctioned holidays. Samhain became All Saints’ Day, also called All-Hallows Eve and, eventually, Halloween. Despite this takeover, many of the original traditions still survived and were essential parts of local culture.

This year will see only the eighth full moon on Halloween night since Berthoud was settled in the 1860s, but what would the holiday have looked like back in the early days of the town as European settlers brought across their own traditions? The element of mischief certainly prevailed with reports of pranksters coated chapel seats with molasses in 1887, exploded pipe bombs for kicks in 1888, and smeared the walls of new houses with black paint in 1891.

In the early 1900s, there was a move in America to mold Halloween into a holiday more about community and neighborly get-togethers than about ghosts, pranks and witchcraft. At the turn of the century, Halloween parties for both children and adults became the most common way to celebrate the day.

2020 promises to be a little different from previous Berthoud Halloweens, but maybe we can take some lessons offered by our ancestor’s ancient traditions to help see us through the dark winter as a united community. After all, this amount of magic only comes around once in a blue moon.