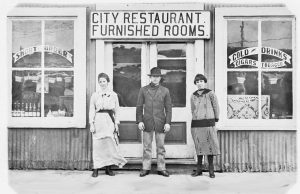 The building at 315 Mountain Ave. that recently housed Simply Shabulous was used as the City Restaurant in the 1910s. Cobbler Jake Zoller occupied the building from 1937 to 1983. City Star Brewery recently purchased the building and plans to construct a beer garden in the back. In the 1910s’ photo a line of neatly arranged beer bottles can be seen in the window at the left.
Photo courtesy of Mark French / The Surveyor

Another chapter is being added to the book about Jake Zoller’s shoe shop. The small frame building at 315 Mountain Ave. has been a fixture on Berthoud’s main street since the town’s early days. Most recently the home of Chris Gischel’s Simply Shabulous antique shop, the structure will soon become part of John and Whitney Way’s City Star Brewing. The Ways join a long list of attentive owners who have managed to preserve the building’s charm for more than a century.

For many current residents of Berthoud the building is remembered as Jake Zoller’s shoe shop. Zoller, who lost his leg in a motorcycle accident west of Berthoud in 1914, first leased the building in 1927. Following the wreck, local harness-maker Chris “C.P.” Thompson trained Zoller to be a cobbler. Prior to Zoller’s arrival, the structure housed a restaurant, tailor’s shop, photography studio, vulcanizing plant, laundry, and tire store. Zoller operated his shoe repair business in the building from 1927 to 1929 but returned in 1937 and stayed put. In 1983 Zoller closed his shop. He was then 90 years of age.

For years Zoller’s shoe shop was a meeting place for a group of the town’s old-timers who called their daily gatherings the “liar’s club.” Lawrence Davis, Roy Welty, Ernest Newell, Phil Reisbeck and George Motz were among those men who sat around Zoller’s coal stove and swapped tales. When the men brought old photographs to share with their pals, Zoller tacked the pictures to the walls and unofficially founded Berthoud’s first history museum.

For many years it has been said that the building that housed Zoller’s shoe shop was moved up from the Little Thompson river bottom when the town of Berthoud was switched to its current location in the winter of 1883-84. Several small buildings were wheeled to the new town site at that time and the building may have been one of them. Materials seen in the structure, such as log floor joists, certainly support that possibility.

Like many of Berthoud’s old business buildings, additions tacked on to the rear of the structure in the fashion of a classic “shotgun shack” yielded a long string of rooms that served a variety of purposes. Three such rooms at the back of Zoller’s shoe shop were used as the family’s residence for many years. Such arrangements were very common in Berthoud’s small business district in the town’s early days.

Since 1983, when Zoller closed his business, the Nightwinds tack shop, Sharon’s Antiques, Mountain Avenue Pottery, and Simply Shabulous have occupied the building. Some changes have been made to the structure, but the building retains its original low ceilings and wooden floors that bear the traces of century’s foot traffic.

Whatever uses City Star Brewing determines for the building will probably be a departure from the tailors, photographers, rubber-tire repairmen, laundry workers, cobblers and antique dealers that used the building in the past. But then again, that may not be the case. Last week it was reported that an outdoor beer garden is a likely addition to the area behind the building. The photo that accompanies this article shows several beer bottles neatly arranged in the building’s windows when it was used as a café in the 1910s. Who is to say a few beers haven’t already been consumed out back?