Ruthalene Gibbs Hindman passed away on February 25th, 2021, at the age of 84. She was born and raised on a farm in Evans, Colorado, with her three brothers Gaylord, Danny, and Calvin, by their parents Eugene and Sally Gibbs. She graduated from Greeley High School in 1953, where she was active in 4H, Colorado Girls Club, and choir. She was a leader in the National Honor Society and was elected Rodeo Queen. 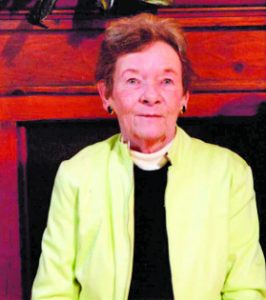 She attended Colorado Teachers College (now University of Northern CO) and then went to work for Mountain Bell Telephone in Denver, where she met her future husband, William J. Hindman Jr. They married in September of 1958 and moved to Westminster, CO, where she gave birth to their two children, Jeffrey and Nancy. During their 62 years of marriage, she was active in Girl Scouts, PTA, Boy Scouts, and numerous community groups. Ruth was always giving back to her community and supporting the activities of her children and husband. She was an accomplished seamstress and had a love of gardening, crafting, organizing events, and playing golf and tennis with friends and family.

For the past twenty-six years, Bill and Ruth lived at Kiawah Island, SC, where Bill was a consultant with Kiawah Partners and Ruth was active with her bridge, golf, and tennis groups. She was the founding member of the Ladies Bridge Group at the Kiawah Island Club. Prior to that, they lived in Lakewood, CO, New Providence, NJ, and Dallas, TX, during Bill’s career with AT&T.

Ruth made friends everywhere she went; her good-natured, natural warmth meant she could strike up a conversation with anyone, from a waiter to the cashier at the local market. She had a genuine interest in others, a wonderful sense of humor, and a kind heart. She was always looking for a way to help others. She believed in hard work, and was extremely tough and tenacious, owing to her farm upbringing. She never complained–her outlook was positive even when circumstances were not. She will be greatly missed by everyone fortunate enough to know her.

The family will hold a private gathering in remembrance in Clark, CO. In lieu of flowers, contributions can be made to the Kiawah Cares Foundation at https://kiawahcares.givingfuel.com/donate , or to the Colorado Cattleman’s Agricultural Land Trust at https://ccalt.org/donate/ .