Nancy was the daughter of the 1957-1959 Mayor of Longmont, CO, Richard C. Troxell and Fern Ludene Troxell. Nancy grew up in Longmont where she graduated from high school. Nancy briefly and proudly studied at the University of Colorado before starting her family. Professionally, Nancy was a jack of all trades throughout her life, having dabbled in real estate, working as an airline representative, bank teller, and waitress. However, her favorite role was that of being a dedicated mother to her three children Paul (Cactus), Ludene(Ludy), and Gina. 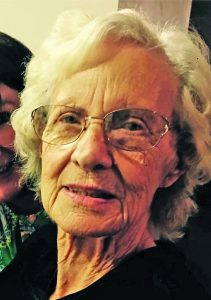 After raising her family, Nancy became a ‘Snow Bird,’ spending half her time in Queen Valley, Arizona where she enjoyed golfing, walking, and socializing with friends. The other part of the year Nancy lived in her most treasured spot, “The Cabin” in Allenspark,CO. The Cabin has been in Nancy’s family since the 1940’s where she made countless and cherished memories–it truly was her happy place. There were so many things she loved about being at the Cabin. She enjoyed the mountain air, checking on how high/fast the river was, getting water from Crystal Springs, pointing out Mt. Meeker vs Long’s Peak, watching the wildflowers bloom, spending quality time with her friends and family, and telling stories. ‘The Cabin’ will forever be a special place that will always remind us of her, and help us to keep her close in our hearts.

Nancy’s deep love of animals was unmatched by most. You could always find her with a treat in her pocket just in case there was a ‘good boy’ or ‘sweetheart’ lingering nearby, for there was never an animal that she would risk developing a complex about her love and affection for them. Whether it was horses or dogs, her love was unconditional. This passion was so ingrained in who Nancy was that it was apparently genetic, as it is a trait she passed on to her children and grandchildren.

Nancy’s charismatic personality, feisty sense of humor, and her honesty will be missed dearly by all those who knew her.

A celebration of life will be held during the summer of 2021.