This is the story of Howard Duane Buehler, an amazing man that was deeply loved, greatly missed, and will always be cherished. On January 29, 2022, God needed a farmer. 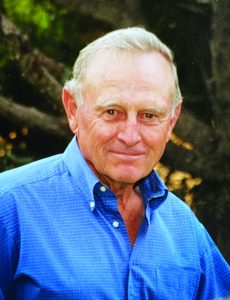 Howard was born April 6, 1935 in Berthoud, Colorado to Jake and Alice Buehler. He called Berthoud home his entire life, never leaving a one-mile radius. Howard graduated from Berthoud High School in 1954 and married his high school sweetheart, love of his life, Virginia Starck on January 22, 1955. Recently, they celebrated their 67th wedding anniversary. Howard and Virginia built a beautiful family including one son and four daughters that are their pride and joy.

As a steward of the land, Howard’s passion was operating the combine, never missing a year harvest since the age of 15. Devoted to the agricultural community, Howard belonged to the Boulder and Larimer County Irrigation and Manufacturing Ditch Company, serving as President from 2001-present. Through the years, Howard might have caught you in conversation about his personalized belt buckle awarded to him in 1998, for being a Coors Top Barley Grower. Proudly farming for Coors for more than 60 years, Howard was awarded in 2020 for his success in growing Moravian 170 barley variety. Viewing farmland from above, Howard was private pilot since 1962 until his heart attack in 1997. Howard belonged to the International Flying Farmers Organization from 1972-2022, holding several offices.

Selflessly, Howard was a mentor to many young farmers, was known for his amazing hugs, the ultimate family man and could never tell his wife no. Howard was also the greatest sports dad, never missing games. Traveling near and far, Howard’s favorite destination was St. Thomas with his wife and children. Howard and Virginia also flew their private airplane all over the United States. Howard’s family knew harvest was not the time to test his patience, but there was no greater blessing in life than his family.

He is preceded in death by parents, Jake and Alice Buehler.

In lieu of flowers, memorial contributions can be made to Immanuel Lutheran Church building fund.