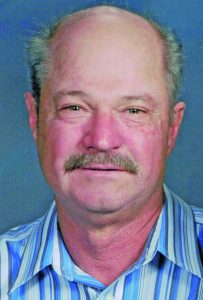 Harold “Ed” Hall was born June 22, 1947, in Lone Tree, Iowa, and died Aug. 6, 2017, at his home in Berthoud, Colo. Ed grew up on a farm in Lone Tree and often helped with the family farm. He was a life-long trucker who jointly owned Hall and Associates with his brother Bob for 10 years. He also served in the Navy during the Vietnam conflict. Ed never met a stranger and helped down-and-out people by providing them with work and housing.

He was preceded in death by his parents, Cleo and Kathryn Hall, and his brother Ernie Hall.

A celebration of life will be held Saturday, Aug. 12, 2017, at 1 p.m. at 306 Hubbell St. in Berthoud, Colo. In lieu of flowers, make donations to American Heart or the Diabetes Association. Go to www.viegutfuneralhome.com for on-line condolences.