George Thomas Wood passed into his eternal rest on Feb. 21, 2018, after a long battle with the neurodegenerative illness, corticobasal degeneration. He leaves behind a rich legacy of trusting God, even in the hard places (1 Peter 3:17).

George was born on Jan. 3, 1955, in Boulder, Colo. Shortly thereafter, his family moved to Fort Collins, Colo., where he spent the next 23 years of his life. He graduated from Poudre High School in 1973 and went on to attend Larimer County Voc-Tech on an automotive scholarship. His career as a diesel mechanic began when he went to work for Ben’s Diesel Repair where he displayed a natural affinity for understanding mechanical systems. 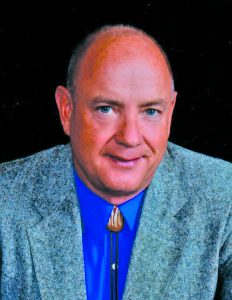 In 1975 a friend asked him to join a church choir where he met Dianne Drake. He was attracted to her vivacious personality, curly hair, and love for God. Although he was two hours late for their first date — a pattern for the rest of his years — Dianne was convinced immediately he was the one she would marry. He was convinced when she cooked his goose — literally. They enjoyed many adventures together, including rides up and down the local canyons on his motorcycles. On Dec. 30, 1977, they were married at First Baptist Church in Fort Collins, and it was only fitting they left for their honeymoon on his Kawasaki 900 motorcycle — despite it being the end of December.

Shortly after getting married, George began to work at Dalton Truck Sales in Longmont, Colo. In 1980 he was presented with the option to buy the service portion of the business, and a lifelong desire to be self-employed was realized. In spite of many challenges, he successfully negotiated the ups and downs of business and began to make a name for himself in the trucking community. D&D Service Company initially relocated to a smaller, more manageable building behind Sekich Equipment Company at Interstate 25 and Highway 66. As business grew, the company moved to a larger rental shop in the Sekich Business Park. Then, in 1988 George bought the lot behind the rental shop where, after breaking ground in 1992, the current shop was opened in 1993. It was at that time D&D Service Company was renamed Heavy Duty Truck Repair, Inc. to better reflect the nature of the business.

George identified himself as a follower of Jesus Christ and sought to live out his faith in his work. He desired to serve God in every repair job and to authentically love each person he met. He valued both employees and customers, as well as their families. By cultivating a sustainable business, he was blessed to be able to care for the people God put in his path, and keep many trucks on the road.

In addition to operating his business, George cherished being involved in many community organizations. He eagerly served as a 4-H leader, Boy Scout leader, scoutmaster, and Sunday-school teacher. He took seriously his spiritual gift of “helps” by serving as a deacon in his church and shepherding an adult Sunday-school flock. He loved helping people in need, rescuing people in difficult situations, caring for neighbors, serving friends, and looking out for the aged around him. He relished using his financial means to provide gifts and loans to those in need. He enjoyed financially supporting area sports teams, buying Girl Scout cookies, and giving to the local crisis pregnancy center.

George will be missed by all who had the privilege to know him. He is survived by his wife Dianne; his beloved children Genessa (Ryan) Smith of Martin Tenn., Derrick (Tina) Wood of Leadvill, Colo.; and Stephen Wood of LaSalle, Colo.; his brother, Don (Karen) Wood; his sisters Marcia (John) Mundell, Susie (Rick) Wood, and Tina (Joel) Vosberg; his brother-in-law Gary Graves; six precious grandchildren; numerous aunts, uncles, cousins, nephews and nieces; and extensive business and church families. He was preceded in death by his father, Perry Marvin Wood, mother Barbara Vergean Wood, and sister Janet Graves.

A visitation will be held Thursday, March 1, from 5-7 p.m. at Ahlberg Funeral Chapel in Longmont. A funeral service to honor George’s life will take place Friday, March 2, at 10:30 a.m. at Calvary Church in Longmont, followed by interment at Berthoud Greenlawn Cemetery and a reception at Calvary Church. In lieu of flowers, contributions can be made to Life Choices Pregnancy Center (lifechoices.org) or CurePSP (psp.org). Visit www.ahlbergfuneralchapel.com to share condolences.