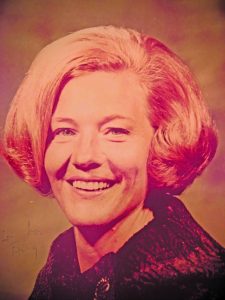 Betty Schlesinger Greenwood (Jackman) passed away in her home in Berthoud, CO February 10, 2022, surrounded by her family at the age of 92. Betty was born on July 22, 1929, to Ann and Otto Schlesinger in Riverside, IL. She was the youngest of 4 children.  She married Warren Jackman of Springfield, IL in 1949. In addition to raising a family, they helped start the Tennaqua Swim and Tennis Club in Deerfield and the Bannockburn Tennis club in Bannockburn, IL. Betty became a very accomplished tennis player and instilled a deep appreciation of the game in her children. She had a great love of travelling and became the owner and manager of Center Court Travel Service in Chicago. She made many trips to Europe, visited China and Russia, and crossed the Atlantic on the original Queen Mary. At the age of 50 she began taking flying lessons and made a number of solo flights around the Midwest. In 1980 she married El Carol (Gus) Greenwood of Houston, TX.  Gus was an avid golfer and Betty took up the game with a passion.  They lived in Houston and were members of Champions Golf Club where she played several days a week. Betty was very proud of her hole-in-one!   When Gus passed away, she moved to Berthoud, CO to be near much of her family. Betty was an avid reader, a creative knitter and seamstress and took pride in her sewing and mending skills. She also loved to paint and has left many examples of her artwork. It was not unusual for Betty to sit down at the piano or organ and play her favorite hymns. She spent countless hours volunteering at North American Ministries in Houston and the Habitat Thrift Store in Berthoud.

Betty was preceded in death by her parents, her two brothers Otto and Richard, her sister Barbara, her first husband, Warren, her husband, Gus, and her son David Jackman of Denver, CO. Betty is survived by four children: Philip (Theresa) Jackman of Galena, IL, Steven Jackman of Taos, NM, Amy Fieling (Guy Grigsby) of Erie, CO, and Ann (Eric) Pederson of Berthoud, CO, as well as nine grandchildren and eight great-grandchildren. She will be greatly missed. There will be a Celebration of Life in June. Arrangements are pending.