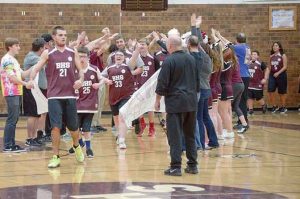 As time ticked to zero on the scoreboard in the Berthoud High School gymnasium on Feb. 3, sophomore Aidan Roper took a shot and scored the final points of the game.

Basketball is one of Roper’s favorite sports. He attends varsity games at the high school throughout the season to cheer on his classmates but, being a special-needs student, he’s never had an opportunity to be a part of the team – until now.

“It felt really good,” Roper said after the game. “I feel like I got my exercise.”

Twenty-four BHS students took the basketball court by storm that afternoon and destroyed their opponents by a score of 45-24 in front of a modest crowd of students, staff and parents. Their opponent was a group of familiar foes that included BHS teachers and staff. But what made the game special for both teams, was the students’ team included eight special-needs students – like Roper – who played alongside their peers in the inaugural Unified Basketball game at BHS.

Unified Basketball is a program through Special Olympics that is dedicated to promoting social inclusion through shared athletic programs by including general and special education students. The program operates on the simple principle that practicing and playing a sport together is a quick path to friendship and understanding. And according to Allison Aue, BHS special-education teacher who also played on the teacher’s team, that is exactly what this program does.

“Our goal is to link the general students with [special needs] students, and this is just another way to bring the extracurricular [activities] into that,” Aue said.

And that first game was quite a sight for Unified team’s coach, Kim Skoric.

“I had no idea how awesome it was going to be when we started it, but it’s awesome,” Skoric said. “I hope that kids and parents who didn’t get to see this game come to another game this season, because it’s something to see.”

Unified Sports teams are comprised of students of similar age and ability, which makes practices fun and games more challenging and exciting. For some of the parents it was a special moment to watch their students participate in a team sport.

“I love that some of these parents got to videotape their kids as athletes for the first time,” Skoric said. 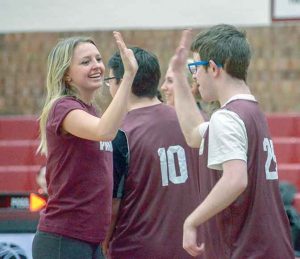 For Heidi Budd’s mother, Angie Purdy, the opportunity for Heidi to play on the team is valuable beyond measure.

“This gives them the opportunity to be an athlete,” Purdy said. “Having this come to Berthoud High School to give her an opportunity to participate is great.”

Surrounding Thompson School District schools have had the program for a while, but parents like Purdy and teachers like Skoric are happy Berthoud finally provides the opportunity to Berthoud students.

“It’s never too late to get a program in that involves general-education and the special-education kids together where they feel welcomed and are social,” Purdy said.

Having a sport in common is just another aspect that helps students develop friendships at school as well, Skoric said.

“Their lives would not have intersected as they have now without this,” Skoric said. “Now they have something to talk about.”

That is basketball; and beating the teachers, of course.

BHS alone has 60 special-needs students in some capacity that before now were left without athletic opportunities and being part of a team. And it’s that social aspect that can be even more beneficial to the students, according to Aue.

“It’s crazy to see their faces and how excited they are,” Aue said. “It gives them purpose and something to be excited about; that they feel like they are part of the school community as a whole. This gives them that, and they feel so proud.”

Berthoud’s Unified team has four games left on its schedule; they played Thompson Valley’s Unified team on Feb. 8, but contests with Loveland High School on Feb. 15 and Mountain View on March 1 await. There’s also a game against the BHS student council scheduled for Feb. 22 at 6:30 p.m. in the BHS gym.

Skoric hopes to have a rematch with the teachers to close out the season, if the teachers are willing to play again.

“This game was so cool,” Skoric said. “I think [the teachers] would play again. I think that’s how I want to end the season.”