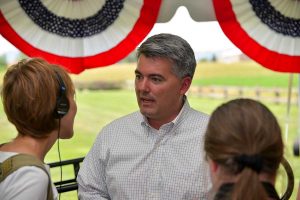 U.S. Senator Cory Gardner talks with reporters after the Northern Integrated Supply Project rally at Northern Water Conservancy District’s headquarters in Berthoud on July 2. Gardner was the event’s keynote speaker in support of the project that has had significant opposition. But, the event was well attended with nearly 200 people from as far away as Fort Morgan and including all 15 participating members in the project. A Supplemental Draft Environmental Impact Survey was released on June 19 and is open for public comment until Sept. 3.
John Gardner / The Surveyor

Proponents from all of the 11 participating communities involved in the Northern Integrated Supply Project (NISP) attended a rally at Northern Colorado Water Conservancy District’s headquarters in Berthoud on July 2. It was the fifth rally of its kind since work began on the project more than a decade ago.

“We are here to celebrate a milestone,” said Eric Wilkinson, general manager for Northern Water, speaking of the issuance of the Supplemental Draft Environmental Impact Statement (SDEIS) for the project that was issued on June 19. The draft EIS is open for public comment until Sept. 3 and that is where supporters can help, Wilkinson told the crowd.

The two reservoirs, if built, would potentially supply as much as 40,000 acre-feet of water annually to 11 cities and towns in the Northern Colorado area. NISP participants include: Dacono, Eaton, Erie, Evans, Firestone, Fort Lupton, Fort Morgan, Frederick, Lafayette, Windsor, and Severance, as well as the water districts of Central Weld County, Fort Collins-Loveland, Left Hand, and Morgan County.

The City of Fort Collins opposes the project, and the Town of Berthoud isn’t a participant either after, in 2008, the Berthoud trustees approved the sale of Berthoud’s shares of water in the project to the Town of Frederick for $30,000. According to reports in the Berthoud Weekly Surveyor, then Town Administrator Jim White reported to the board that, to that point, the town had invested roughly $160,000 for the town’s shares in the project.

“Yes,” Hart said. “NISP is on the list of desirable resources that the town would be interested in acquiring.”

Hart said it was his understanding the town sold its shares in 2009 because the town simply didn’t have the revenue to keep them.

While Berthoud may not be a participating municipality in the project, not approving the project will impact the area, according to Northern Water’s President Mike Applegate.

“The idea that if you don’t do something that things are going to stay the same is wrong,” Applegate said. “There are going to be unintended consequences; and doing nothing doesn’t solve the problems.”

Applegate said the communities to benefit from NISP believe it’s the least damaging environmentally and it makes the most sense regionally. He said one alternative of taking water away from irrigated farm land isn’t a realistic option.

“Buying and drying of agricultural water, it seems cheap and easy but the unintended consequences for the area, you certainly start changing the dynamics of the local economy,” he said.

And that would impact Berthoud’s economy, too.

“Berthoud’s growing and doing some things, but this is a community that has its roots in farming,” Applegate said. “If you start losing irrigated ag, it starts impacting more than just the farmers; people who supply the farmers are going to be hit too.”

“If we don’t build it, we’re going to be 600,000 to one million acre-feet short of projected needs,” Gardner said.

That water shortage means prospective companies may opt not to locate in participating communities or Berthoud, and that means families that want to move here may not have the opportunity, he said.

To have irrigated land converted into dry land would lead to an economic and environmental catastrophe as well, Gardner said.

“It also means that farmers who built this country, and our state, are going to be leaving and going away,” Gardner said. “That 500,000 to 700,000 acres of dry-up will be hundreds of millions of dollars in economic impact leaving our economy.”

With the approval of the SDEIS and if everything else went smoothly from this point forward, it’s speculated the project could still be years from actually being constructed.

But the participants have enough faith in this process, he said, they have already authorized preliminary geotechnical studies on the damn site and already have preliminary information in place just to get ahead of the game, so once the permits are issued they can move forward with design.

“They’re confident that this is the best alternative; they’ve done their homework,” Applegate said. “They want to get this thing built.”

The lengthy process also needs to be more defined to allow necessary projects to move along more quickly, according to Gardner.

“Government has developed bad habits over the past several decades that it needs to fix,” Gardner said. Those bad habits are too much bureaucratic process and red tape.”

Cutting the red tape and streamlining the process is as much a part of the debate as where and how to build a reservoir. Gardner suggested book-ending decision times during the process to expedite projects.

“From the time a permit is applied for, I’m not saying the agencies have to say ‘yes’ to everything, but I’m saying, say yes or no after a specific amount of time so that if you say ‘no,’ they know how to correct it, and if they say ‘yes,’ they can move on to the next permit,” Gardner said.

“Whether it’s a matter of resources that need to be allocated, a matter of human resources, capital, spending their time to get the job done, Congress has a role to make sure those questions and answers are being solved.”