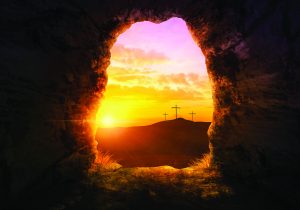 Easter falls this year on April 1. But it’s not an April Fool’s joke.

A Sunday-school kindergarten teacher was trying to determine how much religious training her new students had. She found one five-year-old boy who knew absolutely nothing about the story of Jesus. She began by relating to him the death of Jesus on the cross. When he asked her what a cross was, she picked up some sticks and, fashioning a crude cross, she told him Jesus had been nailed to a cross and had died. The little boy, with eyes downcast, quietly said, “Oh, that’s too bad.” But then the teacher quickly related Christ rose again and came back to life. Hearing that, the little boy’s eyes got as big as saucers. His face lit up, and he exclaimed, “Totally awesome.”

That little boy was right. The good news of the empty tomb and risen Savior that we celebrate today is totally awesome. We don’t visit the gravesite of Jesus and lay flowers at his tomb to honor the anniversary of his death — because he’s alive. No fooling.

I’m impressed by six facts that support the resurrection theory:

There can be no doubt the tomb was empty. Joseph of Arimathea, a well-known Jew, donated his tomb. Both friends and enemies of Jesus witnessed him buried. Roman executioners confirmed him dead and buried and sealed the tomb. Yet a few weeks later Peter was preaching in the streets of Jerusalem that Jesus was risen… just a few blocks from the tomb.

It is estimated the stone weighed one-and-one-half to two tons. An early Christian wrote in a manuscript margin that it would take “20 men” to pick it up. Matthew says they rolled it down against the tomb opening after they buried Jesus. After the resurrection, the Gospel writers used Greek prepositions to indicate the stone had been rolled up or away from the tomb. John uses a word that can be translated, “to pick something up and carry it away.” If a large group had come and carried that stone up the hill away from the tomb, the soldiers would’ve had to be deaf not to hear it. In truth, an angel flicked the stone away – not so Jesus could come out, he was already raised, but so the witnesses could come in and see the empty tomb.

First they fell like dead men when the angel appeared, and then the Roman guard fled. They left their post and went AWOL. If a Roman soldier abandoned his post or even fell asleep during his watch, the punishment was death. The Jewish authorities must have gone and examined the site, seen the broken seal (which was also punishable by death), and they realized there was something unexplainable that had happened.  Otherwise, they would’ve brought charges against the guards for negligence. Instead, they bribed them to tell a lie and say that Jesus’ disciples came and stole his body.

Why did the angel insist the disciples come into the tomb and look at the place where he’d been laid? Apparently there was something about it that was intended to be evidence. John tells us Joseph of Arimathea put 75 pounds of spices around the body of Jesus and then wrapped him mummy-style with strips of linen before placing him in the tomb. On Sunday morning when the report came the tomb was empty, Peter and John raced to see for themselves: “Then Simon Peter… arrived and went into the tomb. He saw the strips of linen lying there, as well as the burial cloth that had been around Jesus’ head. The cloth was folded up by itself, separate from the linen. Finally the other disciple, who had reached the tomb first, also went inside. He saw and believed.” (John 20:6-8)

The grave clothes were undisturbed. You see, it was a resurrection, not just resuscitation. Jesus passed from death into a new sphere of existence.  He just vaporized through the clothes like He later passed through doors to appear in the upper room. All that was left behind was the empty shell of the mummy wraps – like the vacant chrysalis of a caterpillar’s cocoon. The special cloth that had been folded over His head fell where His head had been, separate from the other linen wraps.

There were at least 10 separate appearances that we know about. Jesus appeared over a period of 40 days. How do we explain these multiple accounts of Jesus appearing in His glorified body? Some say the disciples made up this story. If so, how do you explain their willingness to endure mockery and persecution preaching a lie… and finally be martyred for that lie? Some say they had hallucinations. Yet, most people who have hallucinations are not mentally stable (unless they’re on drugs). And there is no such thing as group hallucinations. Yet we are told 500 people saw the risen Christ at one time (1 Corinthians 15:6). The best explanation is they actually saw him alive.

Peter’s fear was transformed to courage; James’ doubt was turned to faith; Saul the Pharisee became Paul the apostle. And thousands of Christians declared steadfast allegiance to Christ, even though they were beaten, stoned to death, thrown to the lions, tortured, and even crucified for their faith. Those changed lives and the birth of the church, still going strong after 2000 years, are hard to explain if the resurrection is not true.

Consider the facts: The empty tomb, the moved stone, the Roman soldiers’ story, the collapsed grave clothes, the eyewitness accounts, the radically changed lives. The best logical explanation for those facts is Jesus rose from the dead. The Christian faith is not based on myth or legend, but on the solid historical fact of the empty tomb and the risen Christ. No fooling.