Do not call Nick Thomas a long-shot.

The independent running for the United States House of Representatives in Colorado’s second congressional district has built a campaign around the premise of not being beholden to the agenda of the leadership of one of the major parties. 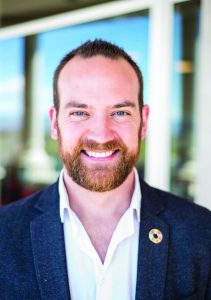 “We need a leader in this district who will stand up for the people against the two-party system. The people of the district need to realize that they are better than what they’ve been given; we are better than voting for lesser of two evils; we are better than being accepting of a status quo that is hurting everyone.” Thomas said in a lengthy and wide-ranging interview with The Surveyor.

The Colorado native who completed his undergraduate work at Colorado State University and earned a master’s degree in foreign diplomacy from the University of Denver admitted it is a herculean task convincing people to vote for an independent candidate, but he believes the endeavor is well-worth pursuing.

As Thomas said, “It is a massive under-taking convincing people that they can vote for an independent. But if you think about it, we would be able to represent everyone, the entirety of CD-2, tomorrow, with seniority. And we would do so in a way that we would also impact the country.”

Seeming to speak extemporaneously, Thomas extolled the careers of late Senators John McCain and Edward Kennedy, calling both “giants of the Senate” and praising both for their willingness to put country and principle above party, and their willingness to buck their party’s leadership. Thomas pointed out the irony that both passed away after battling brain cancer on the same day – Aug. 25 – nine years apart.

“We’re talking country over party; we’re talking people over party,” Thomas said with unmistakable conviction. “If you were to elect an independent right here in the ephemeral artery of the country it would change American politics as we know it. It would start to put us back, it would change the trajectory, it would put us where we could find common ground, where we could remove this ‘the other side is evil’ mentality and find some decency.”

Thomas pointed out being an independent does not mean finding a middle ground between the two major parties’ stances on major issues or possessing an ideology that shifts in the wind. As he explained, “Running as an independent I get that you can be looked at as somewhat in the middle, but in reality, it’s issue by issue, it’s not splitting it down the middle.” Thomas said. Put most simply, he believes in being “socially progressive, fiscally responsible.”

Thomas is an unabashed proponent of free-trade agreements, including the Trans-Pacific Partnership accord the U.S. backed out of last year. He supports Second Amendment rights but believes it is common sense to restrict the mentally disabled from gun ownership. Thomas believes in raising taxes while also reducing spending to cut the budget deficit, saying, “You need to do both,” and adding, “We need to talk about a balanced budget … $21 trillion debt is a huge problem, and it’s not being talked about by either of the sides.”

Something Thomas said would be one of his first orders of business if elected would be to champion a 10-year, $1 trillion infrastructure and mass transportation measure. Admitting calling oneself fiscally responsible while also advocating for $1 trillion in new spending sounds counter-intuitive, Thomas said, “If you’ve gone through entrepreneurship you understand you have to spend money to make money,” and such a plan would be centered around mass transportation and infrastructure, not just building and expanding new roads.

He wants the United States to have an unrivaled military but was very quick to point out that every single diplomatic solution, including dialoging with dictators of totalitarian and authoritarian regimes, is worth the effort and should be pursued.

On matters of healthcare policy, which Thomas calls critical, saying, “If our citizens do not have healthcare it’s a major problem; it’s a security risk for the country and it’s a problem for the economy.” He sees both a need for increased federal involvement and further use of the free market. Thomas supports having a public option for health insurance, a Medicare-type plan for all Americans regardless of age, available, while also advocating for allowing insurance to be purchased across state lines and allowing the importation of drugs from Canada.

“If people don’t have healthcare they don’t deal with symptoms, instead they get sick and the way they deal with it is going to the ER. Hospitals can’t turn away people who are in serious medical need, and if they can’t afford it that bill goes to the taxpayers. Republicans seem to ignore this. They ignore that you’re going to pay for it anyway, so why not pay for it on the front end where it’s cheaper,” Thomas said. Thomas explained the healthcare market in France, which incorporates both a public option alongside private insurance options, works well.

He knows he has an uphill battle to convince voters to cast their ballot in his favor come November. Yet he explained his experiences on the campaign trail have been largely positive, saying more voters are willing to listen to you once they know you’re not a pawn of a major party, and called running as an independent a “beautifully liberating thing.” To help show he is a serious candidate not running for vanity or to pad a resume, Thomas pointed out he began his campaign by rolling out endorsements from Bud McFarland and Andrew Young, who served in high foreign policy positions in the Reagan and Carter Administrations, respectively.

“Let me start with the most important thing of this entire race, I love (Democrat candidate) Joe (Neguse), I love (Republican candidate) Peter (Yu), the problem we’re facing right now is we are horrifically tribal, we are broken, we are continuing to race down a very dark road. The two parties have critically failed us…”

Further information on Thomas and his campaign for Colorado’s second congressional district can be found on his website, https://www.nickthomasforcongress.com/.