On June 3, at about 7:15 a.m., LCSO deputies were dispatched to U.S. Highway 287 and Berthoud Parkway on reports of a traffic collision in the intersection.  The LCSO Collision Reconstruction and Scene Handling Team (CRASH) also responded. 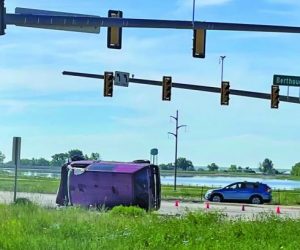 Photo by Becky Hemmann – A traffic collision at U.S. Highway 287 and Berthoud Parkway results in one death June 3.

The investigation revealed a 1985 GMC van was traveling southbound and westbound on the highway, ran the red light at Berthoud Parkway, and struck a 2014 Nissan Frontier.  The Frontier then struck a pickup.

The driver and sole occupant of the GMC van was identified by the Larimer County Coroner’s Office as Tommy Martinez, 66, of Fort Collins.  Deputies confirm Martinez was not wearing his seatbelt and unfortunately did not survive the crash.  The driver and sole occupant of the Frontier was evaluated on scene by medical personnel and was not transported.  There were no injuries associated with the pickup which only sustained minor damage.

The intersection was closed in all directions until about noon.

Deputies do not suspect alcohol or drugs were factors in the crash.

The National Weather Service in Boulder issued a statement on Tuesday stating that the storm had officially been rated an EF1, with maximum sustained winds of 99 mph. The tornado is estimated to have traveled for about six miles and was on the ground for approximately 30 minutes. Two homes are being considered destroyed.

The storm could be seen for miles and was visible from the west side of Berthoud. 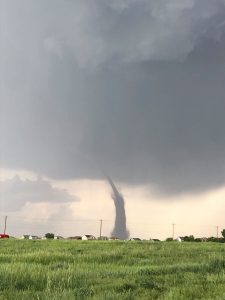 An initial warning was issued for the area surrounding Platteville, including Firestone, Frederick and Fort Lupton Monday at 5:08 p.m., with the National Weather Service Denver and Boulder office, urged residents in the area to take cover while the tornado moved west of Platteville.

No injuries to people were reported.

Landspout tornadoes are similar to waterspouts in that they form from circulation on the ground being pulled up by thunderstorm updrafts. Tornados form from supercell thunderstorms and begin up in the sky and fall down. Landspouts generally last less than 15 minutes and are rated EF0 – the storm this week was an exception.

All Larimer County property taxes must be paid by June 15 to be considered timely.  The June 15 deadline is for taxpayers who pay their taxes in two equal installments; the first half was due March 1.  The second half payment coupon was mailed with the original tax notice in January. Property taxes not paid by June 15 will become delinquent on June 16 and be subject to delinquent interest in accordance with Colorado laws.

Existing Colorado Revised Statute allows county treasurers to create payment plans for personal property taxes only. This does not apply to any other types of property taxes.

Most personal payment plans will consider the balance due and divide it evenly through the remaining months of the calendar year. A written and signed agreement between the Larimer County Treasurer & Public Trustee and the business owner is required. Please contact Vicky Glass at [email protected] or Cindy Stromberger at [email protected] or (970) 498-7020 to discuss your options.

For more information visit larimer.org/assessor/business-personal-property or call the Larimer County Assessor’s Office at (970) 498-7050.

*Case data as of Wednesday morning.

7.44% of the population of Larimer County has been reported to have contracted the virus. Deaths attributed to the virus comprise 0.93% of reported cases. Of reported deaths, 26% were age 75 to 84 and 47% were 85 and older.

As of Monday, 357,895 doses of the vaccines have been administered in Larimer County. 64.2% of county residents over the age of 16 have received at least one dose of the vaccine.