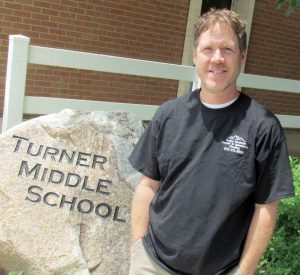 When the school year ended a couple of weeks ago, the students quickly left the buildings. At Berthoud’s Turner Middle School, Principal Bill Siebers exited too.

In Sieber’s place, the school district hired Derrick Martin. Martin comes from Sargent Junior/Senior High School in Monte Vista, Colo., where he served as principal for more than a year.

Prior to Monte Vista, Martin taught in the Bayfield School District in Bayfield, Colo., and Aztec Municipal Schools in Aztec, N.M. for seven years.

“I’m ecstatic to be joining the Turner family,” Martin said in a press release from the school district. “I look forward to meeting the students, parents, teachers and everyone in the community. I will greatly enjoy learning all about the school and getting to work.”

Martin is not completely unfamiliar with Berthoud or Turner Middle School (TMS). His wife Amanda (Verderaime) attended TMS, along with her two brothers, Joe and Dominic.

Martin’s educational achievements include a Bachelor of Arts degree in Government and International Affairs from Augustana College in Sioux Falls, S.D., as well as a master’s degree in secondary education from Adams State College in Alamosa.

After graduating from college, Martin pursued his passion of government and politics, working as an aide in the United States Senate and later in the state Senate of Pennsylvania. Later, he embarked on two solo treks totaling nearly nine months through 22 countries in both Europe and North Africa.

Martin and his family hope to relocate to the Berthoud area in late June so he can be ready for his first year as Turner’s principal.

In a letter Martin drafted for all students, staff, parents, school supporters and Berthoud community members, Martin summed up his feelings by stating, “I can’t wait to get to work.”