At Tuesday night’s regular meeting of the Berthoud Board of Trustees, the board welcomed in two newly elected trustees, Karl Ayers and Sean Murphy, and the re-elected Trustee Tim Hardy. The board also voted to appoint Trustee Mike Grace as Mayor Pro Tem, rejected a plan to replace the grass median on Cedar Drive and handled several other housekeeping matters. 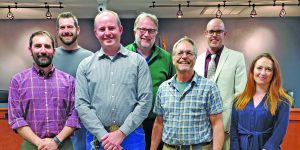 To begin the meeting, each of the recently elected and re-elected board members took their respective oaths of office as presented by Town Clerk Christian Samora to officially join the board as town trustees. Despite seeing a voter participation rate of under 20% in the municipal election, there was a larger than usual crowd in attendance at town hall to welcome the new members to the board.

The board next took up the business of nominating and selecting a Mayor Pro-Tem; a position which serves to run board meetings and serve as Berthoud’s representative in various intergovernmental boards and groups when the mayor is unavailable to serve in those capacities. The Mayor Pro Tem also has the authority to sign official documents and discharge other mayoral duties when the mayor is unable.

Current Mayor Will Karspeck spoke first, nominating Hardy for the position and citing Hardy’s tenure on the board and his work with the Berthoud Mainstreet organization. Trustee Lonnie Stevens spoke next, nominating Grace for the role.

With two former trustees’ terms ending after the official appointments of new board members Ayers and Murphy, the board assigned Ayers to fill the vacant board liaison role for the Parks, Open Space, Recreation and Trails (PORT) Committee. assigned Grace to serve as liaison to the Youth Advisory Committee and Murphy as liaison to the Tree Advisory Committee. The trustees then voted unanimously to approve Berthoud resident James Massie to a vacant board position on the Historic Preservation Committee.

The board voted unanimously to approve a landscape guidance contract with the Boulder-based firm Sopher Sparn Architects for an amount not to exceed $40,000 to, “create guidelines for new landscaping in development to be more sustainable and water efficient, and also to be high quality,” that conforms with the town’s comprehensive plan and newly approved architecture and design guidelines. With the approval, the firm will work with town staff to develop guidelines which will then be presented to Berthoud Planning Commission and town board for consideration.

The board heard a presentation from Keith Knoll, Public Works Operations Manager, who told the board of a plan to remove the Kentucky Blue Grass lawn on the median along Cedar Drive in the north-central part of town. Knoll explained that watering and maintaining the grass is a high cost for the town and replacing the turf with a mix of Blue Grama and Buffalo grass has the potential to save the town on watering expenses.

Town Administrator Chris Kirk stated that, due the opposition from residents, the town would dismiss the plan to replace the grass and would explore options to upgrade the decades-old sprinkler system to save on watering costs. Kirk made a point to explain that town staff values input from residents, particularly those where decisions made will directly impact their neighborhood and thanked the residents for speaking up. That decision was applauded by all members of the board, then officially who dismissed the plan.

The next meeting of the Berthoud Board of Trustees will take place on May 10.