The Town of Berthoud trustees offered the town administrator position to Christopher Kirk, from California, and he accepted at the meeting on Tuesday evening. Kirk will begin on Jan. 22, 2018. We will run a feature story on Christopher in next week’s Surveyor. 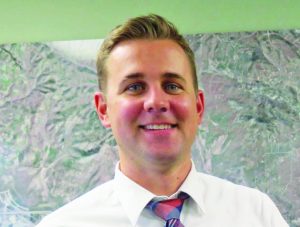 Also during the session, the trustees considered the purchase of two properties near Interstate 25.

According to an information sheet provided by town staff, the larger tract measured 23 acres and the smaller 10.826 acres. M&C Real Estate, LLC owns a 130-acre property in the southwest quadrant of the I-25/State Highway 56 interchange. An approximately 17-acre portion of the 130 acres will be home of Love’s Travel Center which is currently under construction.

The two properties being considered for purchase by the town lie along the southern boundary of the M&C Real Estate site along the Little Thompson River. Again, according to the information sheet, the town agreed to pay $7,500 per acre for the larger parcel and $12,500 per acre for the smaller parcel, for a total purchase price of $307,825. Walt Elish, who brought the item before the board, noted that portions of the properties could best be described as storage areas for old and surplus farm machinery. The sites were cleaned up in 2000 by Western Environmental and Ecology, Inc. They found no hazardous substances there, but Elish thought it would be in the town’s best interests to have the sites re-inspected. The purchase price was also questioned by some on the board.

The information sheet notes M&C Real Estate owns property in the Little Thompson Corridor, “within which a diversion structure is located that provides water at the head-gate of the Minor and Logan Irrigation Ditch. It may be necessary … to potentially use the system to deliver non-potable irrigation resources to the I-25 sub area at a future date.”

Elish stated the purchase of the properties was necessary for future recreation. Past town boards have eyed a trail system connecting downtown Berthoud with the I-25 subarea, and acquiring the properties was a step toward that end.

A motion was made approving (the transaction) and directing the interim town administrator to execute the contract on the 33.826-acre tract for the purchase price, and making the closing contingent on the town’s due diligence with regard to potential hazardous substances and the purchase price. The motion was seconded and unanimously approved.

The board considered the ratification of the town administrator’s execution of an agreement to purchase Windy Gap units and Carter Lake outlet capacity from Platte River Power Authority (PRPA).

An information sheet on this item reports staff had previously presented to the board there was an opportunity to purchase three Windy Gap units and an additional three cubic feet per second of capacity in the outlet at Carter Lake from PRPA.

Staff has negotiated with PRPA and an agreement has been in place effective Nov. 30, 2017. The agreement states it is “contingent on the Berthoud Board of Trustees affirmatively ratifying its execution by the town administrator through a motion, approved by December 12, 2017.”

The document goes on to state the agreement is an excellent opportunity for the town to acquire Windy Gap Units to add to the town’s water portfolio.

Additionally, the price of the water “without considering reuse factors, which are substantial, is below the town’s current fee of $12,500 per Single Family Equivalent (SFE) (.4 acre feet). With a firm yield of 85 acre feet per Windy Gap unit the three units … will provide enough water for 637 SFEs … With reuse of 95 per cent this would result in enough water for 1,243 SFEs.”

The town’s water attorney, Paul Zillis, echoed the information given in the document and answered questions from the board regarding the purchase.

The agreement states Berthoud will pay PRPA the sum of $2 million per unit for a total purchase price of $6 million.

A motion to ratify the town administrator’s execution of the agreement for sale and purchase of three Windy Gap Units and Carter Lake outlet capacity with PRPA was made, seconded and unanimously approved.

The board approved another year of police service to be provided by the Larimer County Sheriff’s Office (LCSO). The town has contracted with the LCSO since 2014 as reported in the information sheet provided. Sergeant Jim Anderson, the chief of the Berthoud Police Department noted the town has grown substantially since 2014, and for that reason the decision was made to add a corporal to the Berthoud force. The corporal will help with patrol duties and also provide a leadership role whenever the sergeant is not available

A spreadsheet outlining the expense to the county for the services provided by LCSO to the town reveals the projected costs for 2018 are $1,109,153.

A motion to approve the 2018 statement of work and budget agreement between the LCSO and the Town of Berthoud, and to authorize the town administrator to execute the agreement on behalf of the town was made, seconded and unanimously approved.

Lieutenant Ian Stewart of the LCSO was present at the meeting and reflected the board’s view that the safety and welfare of the citizens of Berthoud were their primary concern. Members of the board spoke highly of the courtesy and professionalism of the LCSO personnel assigned to the town.

The trustees approved an ordinance setting the mill levy for each dollar of assessed valuation of all taxable property within the town at 9.136 mills from Jan. 1, 2018, to Dec. 31, 2018.

The town’s general fund will claim 6.136 mills, and 3.000 mills is levied for police services to the town.

A motion in support of the ordinance establishing the mill levy for 2018 was made, seconded and approved unanimously.

Town Clerk Christian Samora informed the board of code language updates which were required for sections of the Berthoud Municipal Code. The changes were needed in order to stay current with State of Colorado codes.

A motion to approve an ordinance repealing and re-enacting the affected code sections was made, seconded and passed unanimously.

He also entered a resolution directing the town clerk to conduct the regular municipal election of April 3, 2018 as a mail ballot election.

The trustees unanimously approved the resolution.