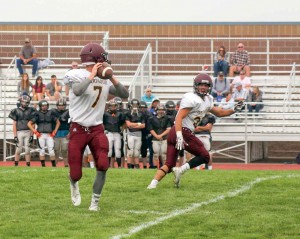 George Bernard Shaw once said, “Progress is impossible without change.” And change is the operative word around the Berthoud High School football team these days.

Diffendaffer, who in his words, “bleeds maroon and white,” made his first order of business to follow Shaw’s sage advice – make changes in the hopes of making progress. The coaching staff was expanded, new offensive and defensive schemes have been installed and the team significantly altered the way it conducts its practices and the off season program. The Spartans even changed their uniforms to help usher in the new era.

Whether the changes will result in a sizable improvement in the Spartans’ win-loss record will be determined in the months ahead, yet the positive energy around the team is palpable.

“I still think there’s a very positive, very exciting buzz around the school, around the program…having a positive buzz around the town is a fun thing,” said Diffendaffer in an interview after the conclusion of Tuesday afternoon’s practice.

“I would have to say it’s the intensity,” said junior wide receiver and cornerback Jackson Hall. “Everybody’s got a lot of emotion in it and football is a game of emotion.”

As the team practiced Tuesday afternoon – with the varsity defense working against a scout team offense – the uptick in intensity that Hall explained was on clear display. Diffendaffer had to twice warn players to not tackle to the ground (the team was not in full pads) and remind them to break contact at the whistle. After seemingly every rep, players and coaches were shouting, either lauding good plays to working to correct errors, or most of the time, both; “It’s game week, let’s get focused!” an unseen player called out to his teammates.

Change is especially noticeable to veteran players. Junior strong safety Chad Ellis, who is entering his third year as a varsity regular, said that there were too many noticeable changes to list.

“I really wish I could put all of those things together but I don’t think you could fit it in a column,” Ellis said.

Pressed a little further, Ellis added, “I think it’s the energy and the fact that people think we’re going to be a successful team…one of the things we’re focusing on as a team is making sure everyone knows this is a completely different environment than it’s been the last couple years.”

Most of the changes have been planned and thought-out by Diffendaffer and his staff, but there was one big surprise along the way. Former Offensive Coordinator Colby Shultz opted to resign from the staff for personal reasons and was replaced by assistant coach Mike Drake.

Drake, who worked closely with Shultz and Diffendaffer in designing and implementing the offensive scheme – a variation of the triple-option – is expected to make a seamless transition to offensive coordinator. Diffendaffer explained he chose the schemes the team would use on each side of the ball, “To fit the personnel we have.” And, he said, transitioning from Shultz to Drake will change nothing, “except for maybe a little of the verbiage.”

The world of sports is laden with examples of how a change in culture can have dramatic impacts on the field of play. The changes made this past offseason and through training camp have Berthoud brimming with confidence. Both Hall and Ellis explicitly stated the team’s goal is to reach the playoffs in 2014.

“I think playoffs… and once we get to that point it’s not done, we’re chasing that state title,” Ellis said.

“I’ve told everyone that if we’re not setting the goal of making the playoffs, then we’re out here for the wrong reason. So our goal is to make the playoffs,” Diffendaffer said.

The Spartans will take that first step towards reaching their postseason goal Friday night at Valley High School in Gilcrest. Kickoff is set for 7 p.m.

For a player-by-player look at the Spartans’ roster pick up the Aug. 28 Berthoud Weekly Surveyor.