“I was one of those geeks in high school who dreamed of building things.” After earning a degree in civil engineering he did just that starting with highways. Five years later he dove into water and stayed. Meet Ken Matthews. A second-generation engineer, he has spent the last 25 years working as an engineering consultant throughout northern Colorado. For the last six months, he’s been Berthoud’s Director of Water Utilities where he oversees not just potable water but also wastewater and storm water management. He arrived in the middle of a Capital Improvement Project (CIP) that addresses maintaining Berthoud’s safe water supply and ensuring its water independence through expanding and updating the town’s water-treatment facility 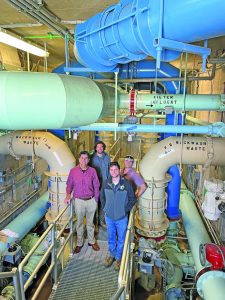 Photo by Amber McIver-Traywick – (Front) Ken Matthews, Mike Murphy (Back) Ben Johnson, Josh Albert – A few members of the team who bring clean water to the people of Berthoud stand inside the Filter Building pipe gallery at the Berthoud water treatment facility.

His top three goals: 1) to take care of Berthoud’s existing systems while building for the future; 2) to operate these systems actively and efficiently, and 3) to openly communicate with users. “It’s a responsibility that goes beyond public health,” he said, a quality potable water system also involves having enough water to support growth, stewarding this resource through conservation and managing the resource so it’s a good value for the citizens of Berthoud.”

A recent letter to Berthoud residents regarding violations identified during a state drinking-water inspection and actions taken to resolve the problem illustrated Matthews’ responsive nature. When approached with a request to tour the town’s water-treatment facility and learn more about processes and those aforementioned updates, he readily approved the request and led the tour. At the facility, he introduced the town’s partner, Ramey Environmental Compliance, Inc., (REC) a water and wastewater treatment company.

“We always go above what is required, whether or not the state requires us to. We use best practices, always.” Meet Mike Murphy, VP of Operations for REC. An engineer’s design needs competent operators at the helm, and Murphy’s pride in his work was evident as he explained the steps taken to move contaminated surface water (from Carter Lake and Berthoud Reservoir) to home faucets.

The first step is to remove taste and odor compounds. This is accomplished using Powdered Activated Carbon, an effective, affordable absorbent used industry-wide. “PAC is kind of like a probiotic … it makes everything work better,” Murphy explained. Does this mean your water will never taste or smell off? “No,” said Murphy. “Also, some people are more sensitive to smells and tastes than others.” But injecting PAC remains a successful, effective industry standard. As part of the CIP, an upgrade of the PAC blending and filter backwash system is currently under construction.

After removing taste and odor compounds, they remove particulate matter. To do this, they add coagulants. In a nutshell, coagulants neutralize charged particles in the water. Then the water is blended. The neutralized particles find and bind with other particles — particles that contain harmful elements such as nitrates, giardia or E. coli to name a few — in a process called flocculation. Once blended the water moves to the sedimentation tank where those bound particles can settle. The second to last step is filtration, and finally chlorine is added. Chlorine has two functions: it disinfects, and it also forms a residual barrier in pipes preventing lead from leaching into the water.

“Pipes protect water from the outside environment. The chlorine helps create a residue that protects the water should a break in the pipe occur,” Murphy explained.

Given the growth, is that still enough? “That’s the million-dollar question,” Matthews said. “Right now we are operating well within the capacity. This month we will be looking at the water and wastewater master plan and want to lock that down more formally. Navigating who owns water is very challenging and will continue to be. As for our treatment technology, it’s tried and true. Still, it’s good to question the status quo.”

“Also,” added Murphy, “the future is hard to gauge. Right now we’re booming. We could see a housing decline, too. No one knows. We try to look ten to twenty years ahead. I can say the next ten years look good.”

But what about the Turion development — the massive Bill Gates project planned for Berthoud’s east side near I-25 and shared with Mead? Plans for the next twenty years include 4,000 homes and 5.3 million square feet of commercial space.

“Part of the master plan,” added Matthews, “will be to determine how [Berthoud] will be serving Turion in the future. Ultimately, as the towns grow together, it is likely the responsibilities of water will also merge.”

So about that letter to residents which identified violations regarding failed devices and backflow issues? The letter mentioned a possible risk to public health. “We answer to federal and state authorities. The letter contained required language dictated by regulatory agencies,” said Murphy. But the faulty devices mentioned have been repaired, he said and there were no reports regarding sickened individuals.

Murphy’s team of operators works round-the-clock to ensure Berthoud’s safe water supply. As part of those best practices, Murphy leads us to the Operations Room where more members of his team run computer programs that monitor the water situation. Operators maintain a constant lookout for broken pipes and other problems. They run daily process checks and abide by state dictates requiring turbidity checks every 15 seconds and running reports every 15 minutes. They also frequently test samples of raw, treated and any type of water along the route to our faucets.

“The more information we have, the better we can address problems. We’re always trying to address the small problems before they become larger” Murphy said.

Still, problems are endemic to life. Matthews is intent on addressing them immediately and keeping residents informed. “One of the things we’ve learned is to get the word out using routine channels like social media. We want people to know what happened, the extent of the event, and when it will be repaired. In hindsight,” he said, referring to a recent water issue where news was slow in coming, “we will notify instantly as soon as we know of an event and keep people updated.” This summer, Matthews hopes to employ more “push notifications,” like a reverse 911 announcement. “It’s still a work in progress,” he said.