David Tisue wanted to turn his love of food into a career, but he got sidetracked by Broadway.

After 40-plus years in the business, Tisue started blogging about his favorite recipes and photographing his creations, finding yet another love. 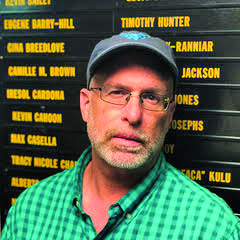 Courtesy photo – David Tisue stands in front of the actor’s board for “Lion King.”

“The food blog and food photography is getting back to the roots I would have loved to have done my whole life,” said Tisue, who is 59.

Tisue wanted to attend the Culinary Institute of America, which he would have done if his parents had been willing to pay the bill. Instead, he went to film school in Montana, then dropped out at the same time of “coming out of the closet in the eighties, which was not easy,” he said.

Tisue went into the entertainment industry in a varied and exciting career that took him all over the U.S. before he moved to Berthoud almost three years ago. After growing up in the Bay area, he lived in Los Angeles, Reno, New York City and New Jersey and has been to all but five of the 50 states. He started out in low-budget film work in LA for three to four years in what used to be a big industry of filming movies direct to video.

“There were all badly…done gang warfare with lots of guns, shootings, car chases and really bad plots,” Tisue said.

Tisue mainly worked as a production assistant, doing things like finding meals at 3 a.m. for the crew after it worked late into the night, helping move sets around and running errands for the actors. He even earned film credit for playing a cop in the 1988 low-budget, direct-to-video murder mystery, “Dead End City.”

In Reno, Tisue entered the field of display management, working at retail outlets from 1992 to 2000, including Sears and a couple of department stores that are now out of business. He oversaw the visual elements of a department store, including hanging artwork and displays, setting tables, changing clothing on mannequins, and redoing display windows and displays and weekly promotions at cosmetic counters.

“I was in charge of making sure the store looked good,” Tisue said, adding that he enjoyed the artistic part of turning drawings into displays or coming up with his own ideas. “There was a lot of flexibility. You were able to be flexible with your artistic vision of how you wanted to do stuff.”

In the 1990s, Tisue worked as a stagehand for touring Broadway shows, mostly in wardrobe costume changes, laundry and any needed clothing repairs.

On one of the Broadway shows, Tisue got noticed and was asked to join the national tour of Showboat—he supervised the dressers there for about a year from 2000 to 2001. He then became costume director for the Nevada Opera for six months, followed by working as the dresser for the dancers and other actors in the “Lion King” from 2002 to 2020. As with traditional Broadway, national tour performances were eight times a week, six nights a week with two matinees on Wednesday and Saturday.

“When you’re actually working on Broadway, it’s a different level of professionalism. … You can’t make mistakes,” Tisue said. “On Broadway, you have to be on your game all the time. The sets and customs are grander and better.”

During his time with the “Lion King,” Tisue met a few famous actors who came backstage after a show.

“You’re in a world that you read about. Even if you’re just a dresser, you’re still part of that world, and the money is even better on Broadway,” Tisue said. “The biggest thing I enjoyed, same as any theater thing, you are part of a company. You’re as important as the people on stage.”

About five years ago while still on Broadway, Tisue started a weekly food blog, whattomunch.com, not missing a single Friday posting. He also received funding from Disney to return to school—he earned a certificate in digital marketing in 2018 and in graphic design in 2019 from Wilmington University. In 2021, he earned a bachelor’s degree in digital photography from Southern New Hampshire University, also on scholarship from Disney.

“I started learning the ins and outs of how to market and do the different parts of how you promote your website,” Tisue said, adding that he markets and engages in social media and SEO with his blog, plus does his own images.

Tisue’s blog consists of original recipes, everything from cakes and casseroles to cocktails—he shares his recipes, personal stories and anecdotes about the ingredients. He likes to focus on his creations but sometimes will share retro cocktails, such as those before the Prohibition Era.

“This is my outlet,” Tisue said. “I’ve always been a major food person. People always asked for my recipes. I always wanted to write a cookbook.”

The first thing people learn about Tisue is that he’s a cook, not a dresser for “Lion King.”

“Food is kind of my big obsession so to speak,” Tisue said. “I love the satisfaction that it makes everyone happy. … It’s neat to do work on something and have it be a satisfying meal that tastes good. … I do live, eat and breathe food.”

Tisue still works as a stagehand, but on a part-time basis, including helping set up the Jurassic World: The Exhibition in Denver and concerts at the Budweiser Event Center in Loveland. He also wants to do traveling shows in the area but doesn’t plan to return to Broadway, as well as photography, graphic design and content writing.

“The biggest thing I’ve learned through all these experiences is patience,” Tisue said. “There are a lot of different personalities. You have to understand people.”