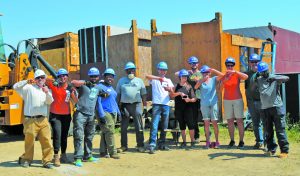 Photo by Amber McIver-Traywick – (Left) Professor Alexander Aptekar poses for a photo op alongside students from the New York City College of Technology with Berthoud Habitat for Humanity and Poudre Valley REA volunteers in front of the modules that make up the DURA house the team is reassembling located at 1776 4th St in Berthoud.

A home designed and built by college students in New York City traveled to California and has finally found its home in Berthoud.

The DURA house is the result of the inventive ideas and labor of over 60 NYCCT students and Professor Alexander Aptekar, as they participated in the U.S. Department of Energy’s 2015 Solar Decathlon, an international collegiate competition to design and build an energy-efficient home, held in Irvine, Calif. The students designed and built the house over a two-year period on property donated to them at the Brooklyn Navy Yard. The project earned the team high marks in the engineering, energy balance and commuting categories. After the competition the home was disassembled and remained in storage containers until this week.

After a chance encounter with members of the DURA team and Mike Cook, the construction superintendent for Berthoud Habitat at the 2017 Solar Decathlon which was held in Denver, a conversation started the ball rolling to bring the home to Colorado. 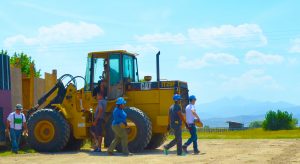 Jan Dowker, the executive director for Berthoud Habitat for Humanity, said the organization was given the unique opportunity to purchase the home, along with its state-of-the-art smart home technology, for the same price they would pay for a traditional stick-built home, “It was an incredible chance for us to team up with the college and at the same time change the face of affordable housing for families in our community.”

Students and professors from NYCCT are currently staying in Berthoud through accommodations provided by the First United Methodist Church and are working alongside local Habitat for Humanity volunteers assembling the home on Fourth Street – the first of its kind for Habitat affiliates in Northern Colorado.

The students participating in the build come from diverse academic and personal backgrounds. After learning about the DURA house through a class lead by Aptekar, Monique Fungkhee, a second-year architecture student, was eager to participate when she heard reconstructing the home in Colorado was a go, “I wanted to be a part of it – I’m excited to be here. I really wanted to do it,” she said.

The DURA home is essentially a modular home that breaks down into three 50-foot-long and eight-foot-wide sections. The roof also comes in three parts. It was designed for simple fabrication, requiring a relatively short amount of time to fully construct. With minimal changes the DURA home can be retrofitted to meet Smart Home standards. Currently the house’s smart technology can, among other things, operate all of the switches in the home through a connected smart phone.

To be as energy efficient as possible, particularly in the extreme weather swings Colorado experiences, the home is tightly constructed. It takes a great deal of precision, with several layers of insulation lining, not only inside of the home, but four additional inches on the outside to ensure energy isn’t being leaked. Aptekar explained having a relatively sealed home is a concern to some when they first hear how it works, but the team has an answer. “You have this special machine in there that gives you fresh air – the ERV takes the temperature of the air and exchanges it with the fresh air coming in, and you barely have to pay for the energy exchange; that’s the key thing to having this sealed house work.”

Every detail of the home was strategically designed to make the most out of the space. “All the furniture is fold-up and fold-down furniture donated by an Italian company. It’s really tied to the theme of being able to be very adaptable to accommodate anyone,” Aptekar explained.

It is also not only ADA compliant, but the solar power provides near-zero energy bills and is designed to be stackable up to four stories. The NYCCT team’s original design plan took into account it could be used to provide housing relief after a catastrophic event as well as for affordable or low-income housing.

Through this project, Berthoud Habitat hopes to be a forerunner in the effort to incorporate these innovative, energy-saving buildings as a valid option for affordable housing in Colorado.

Berthoud Habitat for Humanity is in its 18th year of helping local families find safe and affordable housing. For more information visit berthoudhabitat.org. 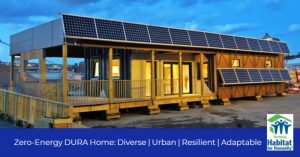