During a recent interview Alya Sylla used the word “wontanara” to describe the power of music. He explained it means unity or coming together in his native language, Susu, one of the 20 or so he speaks and a national language in his home country of Guinea in West Africa. His passion is music and his heart is to share his talents and culture to do just that, bring people together around the world as well as right here in Berthoud, the town he currently calls home. 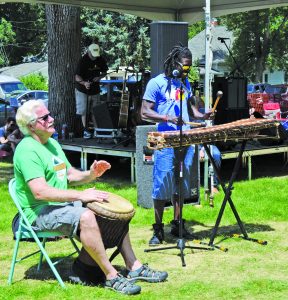 Sylla performed at this year’s Hops and Harley fundraising event held outside in Fickel Park. He skillfully played a wooden instrument that looks similar to a xylophone, called a balafon, accompanied by his friend, student, and fellow Berthoud resident Keith Hancock on a drum. Children and adults alike watched the performance together with smiles on their faces, some even jumping up to dance to the upbeat, if somewhat unfamiliar melodies and rhythms the two were creating. That unfamiliarity is something that, through performances like that one, Sylla and Hancock hope to change in the not so distant future.

Sylla began playing the balafon when he was just 5 years old, “My father is the one who teach me how to play – he is a master balafon player.” His passion for music expanded from there, as in addition to mastering the balafon himself he became a master on the djembe, a rope-tuned, skin-covered goblet drum played with bare hands – his heavily callused fingers that he gladly exhibited as proof of his dedication to the instrument. In addition, he also plays a traditional West African instrument that resembles a cow bell played with rings on the fingers, the drum sets many people are familiar with, keyboard and guitar. His talent has become well known among those seeking to learn the instruments he’s mastered and, according to Hancock, “If the call goes out that Alya is going to play somewhere 100 people show up to get a chance to play with him.”

Sylla has traveled the world sharing the music and culture of Guinea, from Europe to Russia and across the United States, performing and teaching along the way. After touring with a troupe of musicians across Europe he returned home to Guinea where he met his now ex-wife, who had traveled there to study African dance. The couple settled 6000 miles away back to her home state of Colorado in 2010. 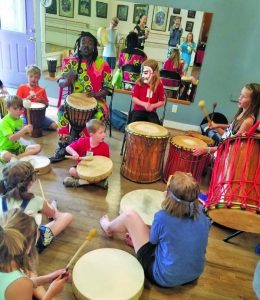 Courtesy photo – Alya Sylla instructs a room full of enthusiastic young musicians during a drumming class at Wildfire Community Arts Center in Berthoud. Sylla, a native of Guinea in West Africa, lives in Berthoud and has performed and taught students around the world.

For the past six years Sylla has worked at CU Boulder as the lead drummer for the African dance classes. He continues to perform and also teaches in various venues across the state, including classes at Wildfire Community Arts Center in Berthoud where he now resides. When asked what he liked about teaching others what he has learned from a lifetime of playing he said, “I love it – I love to be able to share my culture with you guys here in the United States – it brings harmony, it brings people together – you become a family.” Hesaid he also enjoys playing and listening to other styles of music too, like jazz and blues. One of his favorite artists is Bob Marley, who garnered global appeal through his music’s universal message of unity. Sylla said, “If you are good, people will be coming to you – music is my first language.”

Hancock describes himself as “semi-retired” and operates his popcorn business, Poppin’ Kettle, part time, plays guitar and keyboard, and has been drumming for more than a decade. The two men met after Hancock attended one of Sylla’s classes in Longmont. A friendship quickly developed that soon after led Hancock to travel to Guinea with Sylla to experience Guinean culture first hand, “A window of time opened up so I went – I had no idea what I was getting myself into,” Hancock said with a chuckle. Among other adventures while on that trip, Sylla was asked to perform during a medicine man’s ceremony where he played the balafon non-stop for two hours – an event that lead Hancock to give Sylla the nickname Amadeus, a nod to the prolific composer Wolfgang Amadeus Mozart.

The trip stoked a deep interest in Hancock, along with Sylla, to bring “wontanara” through their music and dance to the people of Colorado. In January next year the men will be hosting the A.A.S. (which stands for Alya “Amadeus” Sylla) African Drum and Dance School in Guinea. It will be a two-week intensive for participants to experience West African culture through workshops, group lessons and more. “Part of the school is to build a troupe of drum and dance,” Hancock said. There are eight musicians and dancers currently under Sylla’s instruction that have already been practicing together and will soon begin performing around the area. “African drum music is actually very orchestrated and takes a while to learn, but we are learning and we have a master teacher, so it’s pretty amazing,” Hancock said. The men also hope the troupe is able to perform in schools to introduce a younger generation to a rich music and dance culture they may not otherwise be exposed to.

In a world that is growing smaller every day the importance of understanding and appreciating other cultures becomes even more important.  In a way, Hancock, while explaining African drumming, summed up this idea of unity from differences well when he said, “Each drum actually has its own rhythm that it’s supposed to do – the good troupes every person has their own rhythm that they’re doing and it all comes together, so you might have eight different rhythms going that are made to collaborate and make all of them one.”