Movie Nights in the Park returns to Fickel Park

Bringing the large screen to the park is catching on, and two Berthoud Realtors didn’t want to see their local movie event come to an end.

Lynette Kiehn and her sister, Alissa Volpe, at Your Platinum Team at Keller Williams brought back Movie Nights in the Park this year after it got canceled. Movies in the Park had its start in 2018 and was suspended during the pandemic and is back again this year with a new name and approach.

“This year I found out they weren’t going to do it anymore, so we decided to pick it up and continue it,” said Kiehn, lead Realtor and team owner of Your Platinum Team, which operates out of Berthoud and is the host and a sponsor of the event. “We work primarily in Berthoud and Loveland, and we want to throw events to bring the community together, get our name out and let them know we’re here to help them.” 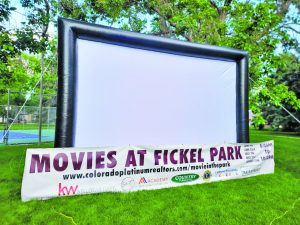 Kiehn obtained movie licenses, purchased a 20-foot portable inflatable movie screen and worked with businesses to sponsor each of the movies. Attendees are invited to bring lawn chairs and blankets, as well as their own picnic dinners.

“We’ve got a pretty good screen and a good projector, so you can sit far back and still see and hear the movies,” Kiehn said, adding that Academy Mortgage, one of the sponsors, is providing the projector.

The movies are kid- and family-friendly and will be held Thursdays in Fickel Park every two weeks through early August. They’ll start at dusk, or about 8:30-8:45 p.m., and are free to attend. The park will open at 8 p.m. for seat selection.

The first movie, “Encanto,” was shown June 9 and had a turnout of about 150 people. The next movie, “Aladdin,” is scheduled for June 23. The other movies include “Space Jam: A New Legacy” on July 7, “How to Train Your Dragon” on July 21, and “Kung Fu Panda” on Aug. 11. The showing of the final movie will include grilled food and corn hole and other games. There also might be giveaways, but plans are still underway, Kiehn said.

“It’s going to be a great party and fun for everybody,” Kiehn said.

The Berthoud Lions Club is sponsoring free popcorn for everyone and snow cones for the kids. Kiehn and Volpe, Realtor and director of operations at Your Platinum Team, are providing goodie bags, also for the kids.

“It’s a great, fun night to have with our community,” Kiehn said.

The sponsors of the movies include COUNTRY Financial, Suzanne’s Carpet and Tile, Academy Mortgage, Lefthand Print Works and Berthoud Main Street. Each sponsor will provide something for the event, such as beverages and activities.